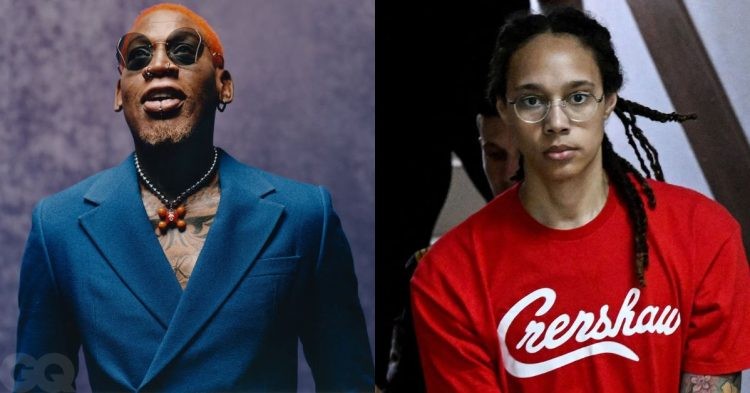 Russia has jailed Brittney Griner for a while now. The country’s government sentenced her to nine years in prison earlier this month. Airport officials arrested her at a Russian airport when they found her with vape cartridges containing hashish oil. Hashish is a form of cannabis and it is banned in the European country.

Many stars have come out in support of the WNBA star. Players like Stephen Curry, LeBron James, and many others have all tried to raise awareness about Griner’s situation. Recently, a former NBA player has emerged as an option to help free Brittney.

Will Brittney Griner play in the WNBA ever again?

Dennis Rodman recently revealed that he will represent the USA in the negotiations. “I got permission to go to Russia to help that girl.. I’m trying to go this week,” he told NBC News. Rodman has been helping fellow Americans get out of conflicts.

“I got permission to go to Russia to help that girl,” Rodman told @NBCNews at a restaurant in D.C. “I’m trying to go this week.”https://t.co/jKKNNM16Eh

In the past, cameras have captured the former Chicago Bulls star with North Korean leader Kim Jong-Un. The pair contacted when Rodman helped the release of American prisoner Kenneth Bae. In addition to that, Dennis also called Russian president Vladimir Putin “cool”.

When asked about it, he claimed, “They don’t know about American basketball, American football. I went over there to represent America as far as basketball is concerned. I’m not a politician, I’m just a basketball ambassador. That’s it.”

Brittney’s situation is something that we never expected. We will never find out if she broke the law intentionally, but the punishment may be too harsh for a first-time offender. Moreover, the country has not given in to any of the US government’s offers, involving sending a Russian criminal over to the other side. The basketball world is hoping Dennis Rodman can work wonders with her situation just like he did on the court back in the day.