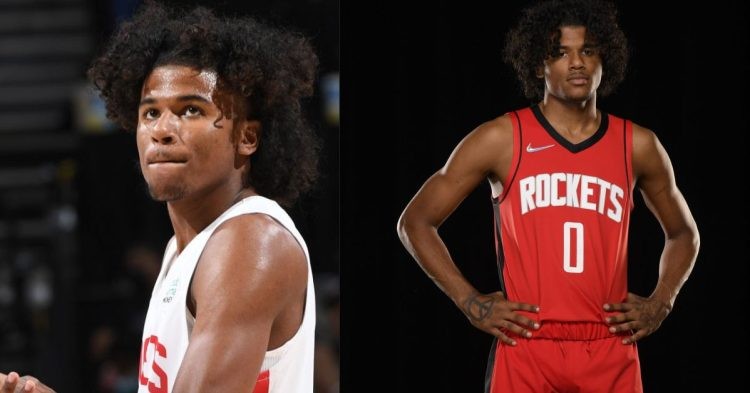 The Houston Rockets boast several talented young players on their roster. One such player is Jalen Green. He joined the team in 2021 but it feels like he has been around for a while. At just 20 years old, Jalen is a prodigy in the making. He is a player that can dribble without putting a step wrong and can end up creating shots out of nowhere.

During the offseason, Green has been putting in the work. According to Rockets head coach Stephen Silas, the shooting guard has been in the weight trying to improve. However, that’s not all he did during this period. Recently, he traveled to Manila for his tour, where the CNN Philippines interviewed him. During the interview, he even revealed the vision for the Rockets team for the upcoming season.

The question for him was how he felt to be one of the only three players in the NBA to be of Filipino descent. He said, “I always say it every time, just to have like the Filipino culture on my back, the whole nation on my back, it’s a great feeling.”

Who were the other players from the Philippines other than Jalen Green?

The first player of Filipino descent was Raymond Townsend. His mother, Virginia Marella was from Batangas, Philippines. Townsend played over 154 games in the NBA for the Golden State Warriors and Indiana Pacers. He retired in 1982 with the Pacers, ending a 4-year career.

The second player from the Philippines would be Jordan Clarkson. The Washington Wizards drafted him at the 46th pick, before trading him to the Lakers almost immediately. Since then, he has played with LeBron James and the Cavaliers during the year that they went to the finals. He currently plays for the Utah Jazz after arriving in 2019.

“Knowing that I’m stepping on the floor and I’m putting on for the Filipino fans, everybody that has a dream here, just to show that it’s possible to do it, it means a lot to me. I don’t even know what to say like I have no words for it, it means a lot, every time I had this question, I just say that I love the fans and I appreciate the love”, Jalen also mentioned.

Being a player from an Asian country will surely be huge for any player. These three players would have made their country proud after playing on one of the biggest stages in the world. As Jalen said, it is quite evident that he has shown people that they can dream of making it to the NBA, just like he did.
Tags: Houston RocketsJalen Green
Previous Post