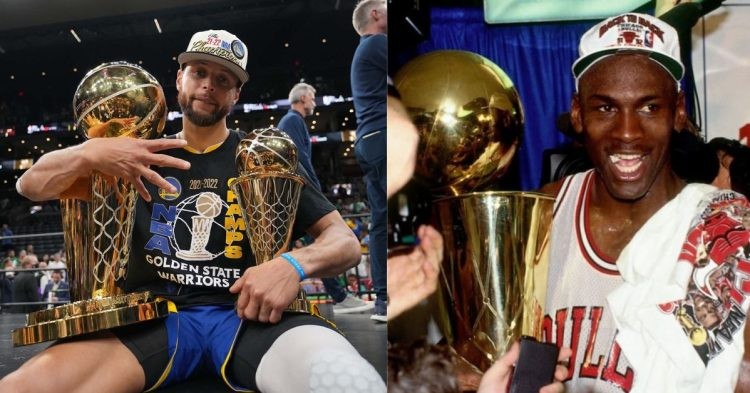 Stephen Curry has had an eventful year so far. He won his fourth NBA championship with the Golden State Warriors, which was the franchise’s seventh as well. Together with that, Steph also brought home the Finals MVP trophy, his first-ever.

The 2021-22 season was not the Warriors’ best. In the Western Conference table, they finished below the Phoenix Suns and Memphis Grizzlies with a record of 53-29. To make things harder, they were up against the Grizzlies in the Semi Finals.

Despite having a tough series, the Warriors did their thing and made it into the NBA Finals, after dismantling the Dallas Mavericks in the Conference Finals. During the finals against the Boston Celtics, the Warriors were struggling at times to break down their young opposition. It was then when The Chef showed up in style to lead his team to victory on multiple occasions.

At a news conference, an interviewer asked Steph what his leadership and inspiration was to help the team win the championship. Curry said, “I remember watching The Last Dance documentary, and the one thing I got from Michael was he never asked anybody on his team or in the organization to do anything that he wouldn’t do himself.”

Steph brought up a MJ quote from The Last Dance doc when asked about his own personal leadership style. “He(Michael Jordan) never asked anybody on his team or in the organization to do anything that he wouldn’t do himself.” 🐐🐐 pic.twitter.com/8IBNUDMEKA

“He set the bar for what work ethic was, and that grind he tried to set the pace with his actions. I’ve always carried that with me as the standard for what I expect from my teammates, I live up to that as well,” the 34-year-old added.

The Last Dance was a documentary that ESPN and Netflix worked together to produce in 2020. It was an eye-opening show that let the world in on His Airness’ journey. The documentary mostly covered the MJ’s 1997-98 season with the Chicago Bulls, which was his last one.

Jordan was always a leader on the court, and off it as well. He knew each and every one of his teammates’ strengths and weaknesses. In addition to that, MJ lived by example, as Steph said. In the same way, Steph has shown his teammates what he expects from them, which is hard work and heart into the game they play. It is obvious that MJ’s career was an example for others to thrive off.

In Game 4 of the 2022 NBA Finals, Steph came up with a masterclass against the Boston Celtics. He made 43 points to bring The Bay the win. At halftime, he already had 19 points. Curry then added another 14 in the third, before destroying the Celtics with 10 in the fourth. Looking at the way he came up clutch, it really seems like he took inspiration from the great MJ.
Tags: Michael JordanStephen Curry
Previous Post