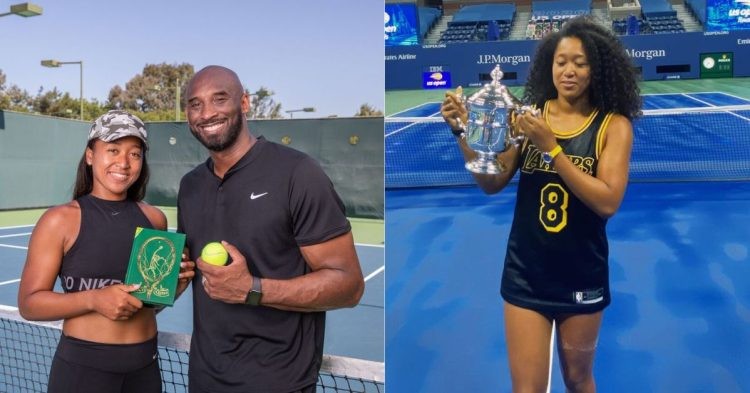 Kobe Bryant’s tragic death has affected many around the world, not just NBA players. The late American passed away in January 2020 in a helicopter crash with his daughter Gianna and a few others. Since then, it feels like we have lost a huge part of the NBA. Kobe Bryant was a no-nonsense player who always knew what to do on the court and off it as well.

Despite being intimidating, he was always willing to help others to become better. One of the famous athletes he supported big time was tennis star Naomi Osaka. She recently tweeted about Bryant.

Kobe Bryant was a mentor for Naomi Osaka before his death

She tweeted, “I miss Kobe.” It was just three words in that tweet but it spoke at length about the relationship the pair had before the disastrous day. In the past, Naomi has revealed in an interview with GQ how Kobe helped her to become better.

She said, “I remember he told me, ‘Imagine that you’re a lion and you’re hunting your prey, so you see a deer off in the distance. And if you watch Animal Planet, you always see the lions looking at their prey, and they have gnats around their eyes. Think of the media and the press as gnats, and you’re the lion, so never get distracted. And you never see the lion trying to swat away the flies or anything like that.’”

The relationship between Kobe and Naomi started when her manager, Stuart Duguid contacted the former Lakers superstar. Their very first meeting took place the next morning. After the meeting, Osaka told Stuart, “That was the most productive meeting I’ve had in my life,” he told WSJ.

It is clear that Kobe’s death affected Naomi and her career. When he passed away, she felt as if there was no one to guide her anymore. In an interview she did for her docuseries “Naomi Osaka”, she reveals how she felt about Bryant’s death.

She mentioned, “I just always wish that I would do something he was proud of, I felt incredibly lucky to have known Kobe and to speak to him on a personal level. Hopefully whatever I do, he won’t be mad about. And he’ll be proud.”