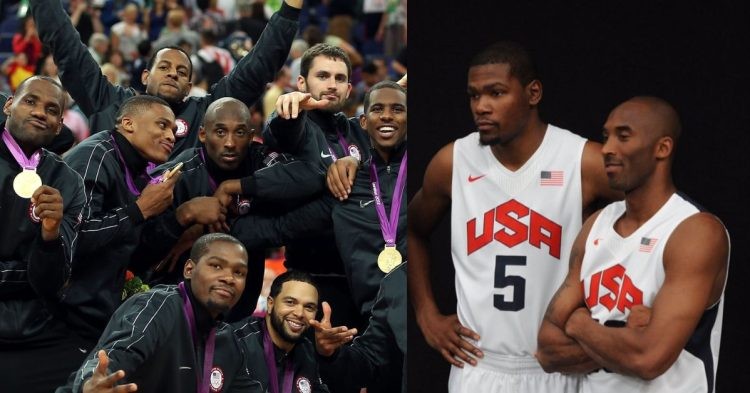 We all know the NBA has players who see each other as brothers. The friendship they have built with each other is truly amazing to see. The bonding the players have off the court will also help them perform better on it. That’s the case for Kevin Durant and the late Kobe Bryant.

Kobe passed away in 2020 in a helicopter crash along with his daughter and a few others. Not only the NBA, but the entire world also came to a stop to mourn the legend’s loss. Kobe was an icon and a representative of what hard work looked like. He formed many relationships throughout his illustrious career and one of them was with KD.

Although the pair did not play together in the NBA, they did feature for the USA on a national level. Recently, Durant tweeted and recalled the memory of Kobe in a video from the 2012 Olympics.

The Brooklyn Nets star tweeted, “Bean tryna get his stance right is too funny. I Miss my dog everyday”.

Bean tryna get his stance right is too funny. I Miss my dog everyday https://t.co/0YCJx5tSBY

Not many might know this, Kobe’s full name is Kobe Bean Bryant. He got the name from his father, whose nickname was Jellybean. We can see Kobe hilariously trying to get the right pose for the picture in the video.

The image is often known as one of the most iconic of all time. It featured world-class players like LeBron James, Kevin Durant, Kobe, Carmelo Anthony, Russell Westbrook, Chris Paul, and Anthony Davis.

How good were Kevin Durant and Kobe Bryant at London 2012 Olympics?

The USA won the gold medal at the Olympics held in London in 2012. They managed to beat Spain in the finals by a score of 107-100. KD led the attack for the USA with 30 points, 9 rebounds and 1 assist. To be honest, he also contributed defensively to the team after registering 7 defensive rebounds out of 9. LeBron and Kobe also performed decently with 19 and 17 points respectively.

Although 33-year-old Kobe did not have an individually successful tournament he would’ve liked, he still showed up against Spain in the finals, when it mattered the most. Adding on to that, the chemistry he had with LeBron and KD was entertaining for fans to see, it was almost as if Kobe hadn’t aged at all and could keep up with the youngsters.