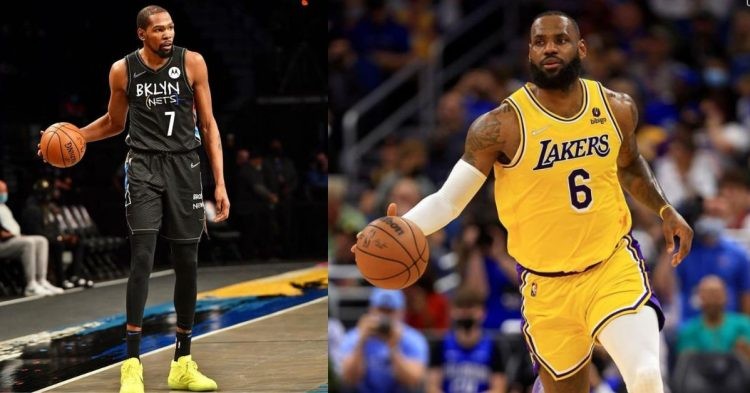 Kevin Durant is one of the very few NBA stars to never miss an opportunity to share his opinion. He keeps it 100% with everyone and that has even earned him a significant number of haters. However, that has never stopped KD from being himself. His Twitter page is filled with his hilarious and unique takes on many different things. The Brooklyn Nets star replies to fans’ questions on the platform.

Similarly, Durant tweeted about the basketball shoes he wears. A fan had asked, “do you ever secretly hoop in another player’s signature for fun or research?”. The question itself was a unique one. We all know many NBA players have their signature shoe lines. Well, have we wondered how many of them would try other players’ signature shoes?

KD tweeted in reply to the question, “Yessir..Kobe’s, Jordan’s, kai’s…bron doesn’t make 18s but I wanna try his and Giannis kicks…ain’t nothin like them god like kds tho”.

Yessir..Kobe’s, Jordan’s, kai’s…bron doesn’t make 18s but I wanna try his and Giannis kicks…ain’t nothin like them god like kds tho 😎 https://t.co/3PcIXNVDoI

Like KD said, Nike does not make LeBron James’ shoes in size 18. LeBron being a size 15 himself, it is unknown why the sports giant produces limited pairs. Basketball players are generally known to be big and if Nike makes size 18s for LeBrons, seems like KD would give them a try.

Kobe Bryant’s signature shoes are one of the most iconic in the league. The Nike Kobe V is often in the conversation to be one of the best basketball shoes ever. In general, the Kobes are the most popular choice of shoes for many NBA players. The shoes truly remind us of the man, just perfect.

The most recent Kobe shoe that Nike released would be The Kobe 6 Protro ‘Mambacita Sweet 16. The footwear aims to honor Kobe’s late daughter, Gianna Bryant who would have turned 16 this year. Reports say that the profits made will go on to the Mamba and Mambacita Sports Foundation.

The 1st shoe to release in the new Kobe & Nike partnership will honor his daughter Gianna, who would have turned 16 on May 1, 2022

“The Kobe 6 Protro ‘Mambacita Sweet 16’ will honor Gigi Bryant. All proceeds from the shoe will benefit the Mamba and Mambacita Sports Foundation.” pic.twitter.com/pgT4Ab4s5g

KD also revealed he wears the Jordans. They need no introduction to anyone in the world. Michael Jordan’s brand has become one of the biggest brands in the history of all sports. People mostly claim that the Jordans have good traction, and ankle support, and are the best for the court.

We can find out that Durant has similar tastes to his Brooklyn Nets teammate Kyrie Irving. The 33-year-old mentions the Kais as one of his footwear of choice. Although we do not know which type KD prefers, Kyrie’s best shoe to date would be the Kyrie 1s in my opinion. The shoe offered complete stability and comfort to the wearer.

Apart from that, KD also mentioned that he wants to try Giannis Antetokounmpo‘s signature shoes, along with LeBron’s. Giannis recently revealed his new Zoom Freak 4 shoe.