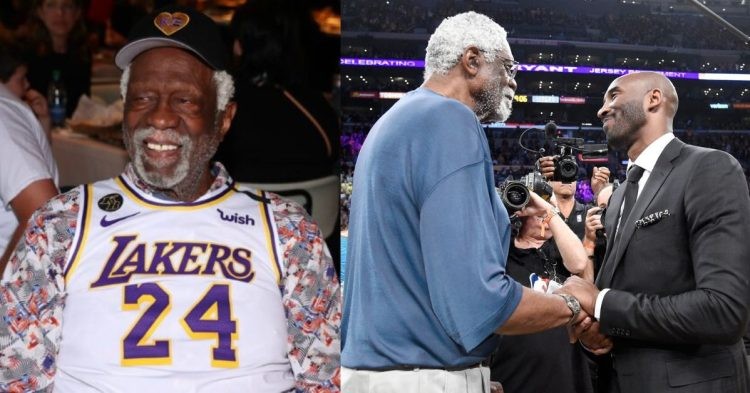 Bill Russell is one of the legends that the world will never forget for centuries to come. It was announced that the 11-time NBA Champion passed away today, aged 88 years old. Throughout his life, he inspired people. With his game on the court, and the game off it as well. He was also famous around the entire country for his contributions to the civil rights movement.

One of the players that Russell enjoyed a special relationship with would be the late Kobe Bryant. We all have seen him give Kobe advice many times in the past. His experience in the game beats anyone else’s, and there’s no one better for Kobe to learn from. Once, Bill told Kobe, “I couldn’t be more proud of you than if you were my own son.”

“I couldn’t be more proud of you than if you were my own son.”

Before Kobe’s passing, he spoke about what he learned from the great Bill Russell in an interview and how he used it to develop his game.

The question for Kobe was what learned from Bill Russell. He said, “he said when I played, I could score the ball, I could handle the ball, I could pass the ball, but it was really important, in order for us to win, I had to look at my teammates and say okay these other players here, they do that better. therefore I must allow them to do that. what I do best is defend, and rebound. and I’m going to completely focus on that.”

Bill’s words prove that there was more to him than just winning championships. He knew how to analyze the teammates around him. He knew that he had to play to his strengths to help the team. His forte was defending and rebounding, as Kobe mentioned. We all have to agree on one thing, Bill was and will always be one of the best defenders in the history of the NBA.

The former LA Lakers star also said, “I thought that was a very insightful thing that I used, and how I was able to go on and win those two championships post-Shaq.” When Shaq left for the Miami Heat in 2004, there was a void on the Lakers team. It took them 5 years to win their next title. Although it’s not easy to fill Shaq’s shoes, they still did it. And they won one more title the year after as well.

It seems like Kobe took Bill’s advice and let his teammates do their thing. Kobe won two Finals MVP awards in a row, together with the titles in 2009 and 2010. The Black Mamba averaged more than 26 points in both of the seasons as he marked one of the best spells of his career.

With the Boston Celtics great’s guidance, Kobe became a better leader in the locker room. He was always known to be a leader among men. But words of wisdom from an all-time great would have definitely helped Kobe understand and trust his teammates more.