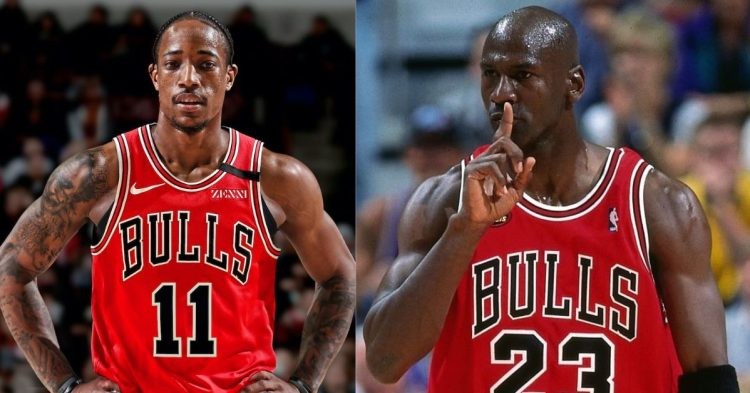 Michael Jordan’s legacy at the Chicago Bulls is a lesson for everyone. The way he played and carried that team acts as a demonstration for every player coming up the ranks on how to perform and put your team first. Moreover, the legacy he built with the Bulls, is one of the things that can never be questioned as long as the NBA exists. The standard that His Airness set, lives to this day. You can just ask DeMar DeRozan about it.

The Bulls got Derozan from the San Antonio Spurs. In the deal, Thaddeus Young, and Al-Farouq Aminu were included for DeMar. Adding on, they also sent a protected first-round draft pick and a couple of second-round draft picks the other way. The American has played 76 games for the Chicago-based franchise. He has averaged 27.9 points, 5.2 rebounds, and 4.9 assists.

DeMar DeRozan talks about the atmosphere at the Chicago Bulls

Recently, DeMar spoke out about the atmosphere at the Bulls with Draymond Green on his show. He talks about how it is to play in front of the same crowd that saw the great MJ play. And how it affects him as a player.

Draymond also mentioned that he feels like Jordan is about to come out of the tunnel every time he hears the Bulls’ music. To Derozan, he asked if the players feel the same way.

The Bulls star answered, “for sure, yeah no question. Even just driving out there bro, like parking outside. I remember seeing all the highlights, Jordan back in the day parking outside. So for me every time I go out there bro, I feel it. I’m not even gonna lie, you just feel like you gotta bring it every single night, especially for those fans”

The Bulls fans saw their golden era under Jordan. The last time they even made it into the NBA Finals, was in 1998. You guessed it, it was under the great MJ. Despite retiring in 1993, he came back and won titles with the franchise. It’s not easy for any player to play in front of the crowd that saw Jordan play. They’re used to seeing a magician pulling a rabbit out of a hat. It’s hard for anyone except Jordan to pull off what he did.

Now, the fans have endured two decades without a single final appearance. Despite that, their standards have not dropped. The way he moved, shot, and even beat the buzzer and snatched the win from his opponents at the last second. Michael is the player with the most buzzer-beaters in NBA history with 9.

DeMar said, “I think we were four or five games into the season, we was playing the Knicks. And I took the game-winner. I airballed. And I just felt like the whole vibe of everything like, what the f**k? Like what was that? I felt like I disrespected the aura of what these fans is used to seeing from obviously MJ hitting game winners, and you know you live for those moments.”

DeRozan learned from that game that day and decided to try and fulfill the standards set by MJ. He said, “ It was that game to where it was like that every shot I take in a clutch, I’m gonna make it count every single time. So you look back at all the moments I had in that arena, it was more so like, I’m trying to inherit the ghost of Michael shooting his fadeaway with the clock running down.”

We can’t blame DeMar DeRozan for going for that shot. But he realizes that it’s not easy in front of the ever-demanding Bulls fans. If we think about it, these were the fans that demanded the same from Jordan too. Even when he was the greatest, the Bulls fans kept on asking for more. And that’s what made Jordan; it pushed him to a point where he went from great to GOAT.