Stephen Curry has proved how valuable he is to the team in his absence due to tailbone contusion. The Golden State Warriors who maintained 0.5 and above record throughout the season up until Curry’s injury are now 0.478 at the 10th position in the western conference. Warriors are being cautious with their star player and are giving him enough time to recover.

The unfortunate injury happened on Wednesday last week against the Houston Rockets in the third quarter. Warriors concluded the game in their favour, however, it has been downhill ever since. They have a 1-6 record without Stephen Curry. This schedule was extremely important for the Warriors as they played relatively weak teams. This could’ve helped them to mount up on the seeding table.

Initially, Steve Kerr and the entire staff was positive that the injury was minor and Steph would be ready to play in no time. The MRI late revealed a contusion and Curry was advised to sideline himself for a week. He missed two games against Memphis Grizzlies and one each against Sacramento Kings and Philadelphia 76ers. 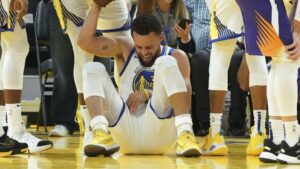 Stephen Curry is ruled out of the game vs. Chicago Bulls on Monday

With Golden State Warriors visibly struggling without their MVP, Curry doesn’t seem to be coming to the rescue anytime soon. The team sidelined him for the home game against Chicago Bulls on Monday. The team is being extra cautious with the only superstar left on the team. They faced severe media backlash for pushing Kevin Durant to play in the 2019 NBA finals. They are determined not to repeat that mistake.

Steph Curry is doing some court work pregame right now. Steve Kerr said he's "making good progress." No word on if he'll practice this weekend. Warriors ruled him out through Monday's home game against the Bulls.

Steve Kerr was positive about his return soon and told fans that he is making good progress. He didn’t give any updates about Steph practising with the team over the weekend. The Warriors need to gear up and get some wins if they plan to make it to the playoffs at all. Their upcoming schedule is mediocre at best and would’ve been easy wins if Curry was healthy.

If Steph is not good to go next week the Warriors may have to kiss their playoff expectations goodbye.