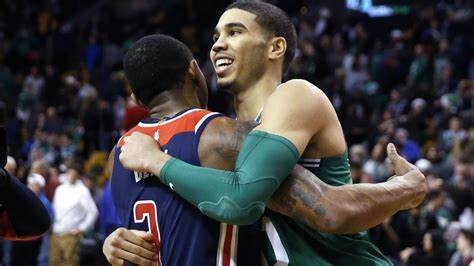 Jayson Tatum and Bradley Beal have been really close friends since they were kids. Bradley Beal is the current shooting guard for the Washington Wizards. Beal however looks to get traded this off-season. Sources suggest that Bradley Beal will send his request for a trade in ahead of the NBA Draft. While there are many teams that would love to add a player of Beal’s caliber to their roster, the Boston Celtics seem to be at the top of Beal’s Wishlist.

Bradley Beal on teaming up with Jayson Tatum

Beal and Tatum were both selected for the Tokyo Olympics 2021. They were extremely excited to be teaming up for the first time. These two childhood friends have never had the opportunity to play on the same team. The Tokyo Olympics would have been the first time but unfortunately Beal had to pull out after testing positive for COVID.

Bradley Beal’s trade rumors began right after the Wizards ended their playoff run. When Beal spoke about what playing with Jayson  meant to him, fans began speculating that Beal might move to the Celtics.

Even from growing up, we’ve never been on the same team, ever. In pick-up, we’re never on the same team. This is definitely exciting for both of us. I’m definitely happy about his growth and excited to see him on the global stage as well as myself and everybody. We have a really good team but Jayson and I have a special relationship and I’m looking forward to it

Jayson Tatum might be trying to recruit Bradley Beal

It is evident that Jayson Tatum want his childhood friend to come to Boston. Recently , Tatum put up a comment on an Instagram post that spoke about Beal’s trade rumors. the comment has gone viral and it sure does seem like Tatum is recruiting Bradley Beal to the Boston Celtics.

The move would be a great boost for the Boston Celtics. Where Bradley Beal will land this off-season is still a question. But one thing for sure is the Celtics will go all in to bring the shooting guard to Boston.