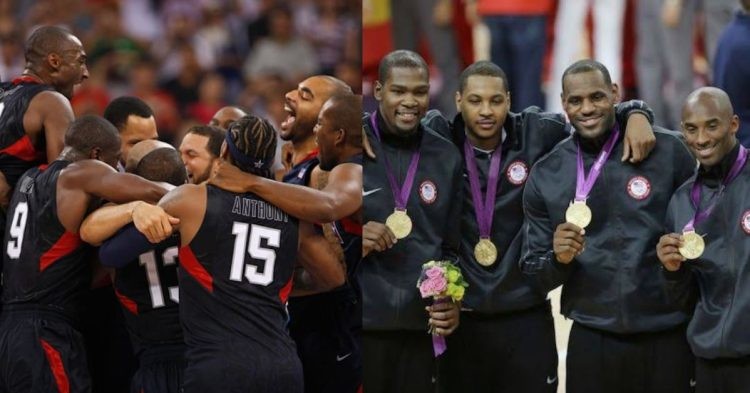 NBA legend and late Kobe Bryant apart from his achievements in the 20 seasons in Lakers is a two-time Olympic gold medalist. Bryant is the youngest player in the history of the NBA to have played with Team USA in the Olympics at the time he made his debut with the Los Angeles Lakers.

Kobe and his team representing the USA in the 2008 Olympic Games in Beijing achieved the first Olympic gold medal. Kobe’s second one was also with Team USA, which won the gold in the 2012 London Olympics. However, let’s take a look in detail at the appearances that Kobe Bryant made in the Olympic Games during his NBA career.

How many times did Kobe Bryant go to the Olympics?

Kobe Bryant, alongside LeBron James, made his first appearance in the 2008 Beijing Olympic Games representing Team USA as the ‘Redeem Team’. According to sources, they lost to Argentina’s Golden Generation at Athens in 2004 and also missed a gold medal in the 1992 Olympics. Kobe averaged 23.5 minutes in the eight games, 15 points, 2.8 rebounds, and 2.1 assists. The team secured a 118-107 win with Kobe making 13 points, 3 assists, and 2 blocks.

4 years later Kobe made his second appearance at the 2012 London Olympics representing Team USA. In the eight games, he averaged just 17 minutes with 12 points per game. Making 17 valuable points in the last game, Kobe and his team secured a 107-100 win clinching their second consecutive gold. Following this, in an interview, Kobe talked about playing for the USA and about his last Olympic game in London. “I’ve always wanted to play for Team USA. This will defy the last Olympic Games so it has a lot of symbolism to it,” he said.

Thus, the late Kobe Bryant’s NBA career and his achievements still today remain to be in the talk among all of us.