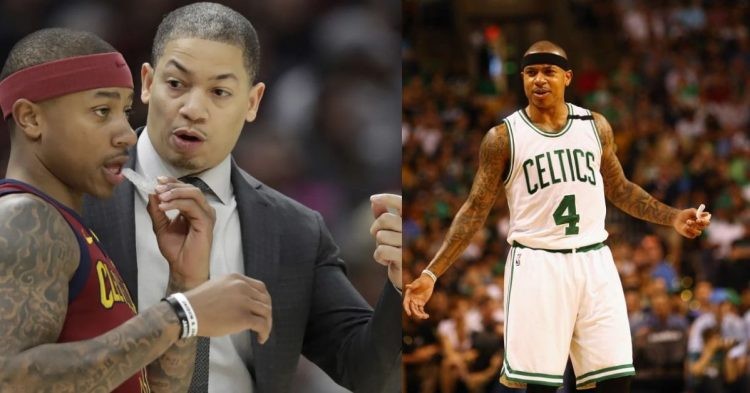 Isaiah Thomas with the Boston Celtics and with his former Cavaliers coach Tyronn Lue (Credit: Twitter)

Basketball is a sport that favors the tall. However, there have always been players who have managed to defy the odds and compete in the sport despite being relatively small. Isaiah Thomas is one of those players. Despite being one of the shortest players to ever play in the NBA, not many people are aware of IT and his accomplishments.

Considering that he is now forgotten and doesn’t play in the league anymore, it is important to show him his due recognition and remind the world of what he managed to achieve throughout his career as an NBA player. Moreover, Thomas is listed at 5ft 7in. This is shorter than the average man, let alone a full-fledged basketball athlete. Thus, his achievements truly speak of a person who managed to defeat the odds.

Not many players are capable of dominating in the league for multiple years like LeBron James or Giannis Antetokounmpo. Some of them have a few good years and are relevant for a much shorter period of time. Thomas is one such player. He was part of the 2011 NBA draft and selected by the Sacramento Kings. However, he is most known and loved for his time with the Boston Celtics.

From 2015-2017, Isaiah Thomas played some high-tier level basketball for the Celtics. In his best year, he averaged 28.9 points, 5.9 assists, and 2.7 rebounds. Additionally, he shot 46% from the field and 37% from the three-point line. These remarkable numbers earned him a visit to the NBA all-star game. Moreover, he also made the all-NBA second team in 2017.

However, his play declined as soon as he was traded from the Celtics and he never averaged close to 20 points per game after his run with Boston. It would startle NBA fans to find out that IT was never kept on the same team for more than a single season. In fact, he played on three teams last season alone. They are the Dallas Mavericks, Los Angeles Lakers, and Charlotte Hornets.

It seems no team is interested in what Thomas has to offer them towards the back end of his career. Nonetheless, we shouldn’t completely forget what a prime IT was capable of.