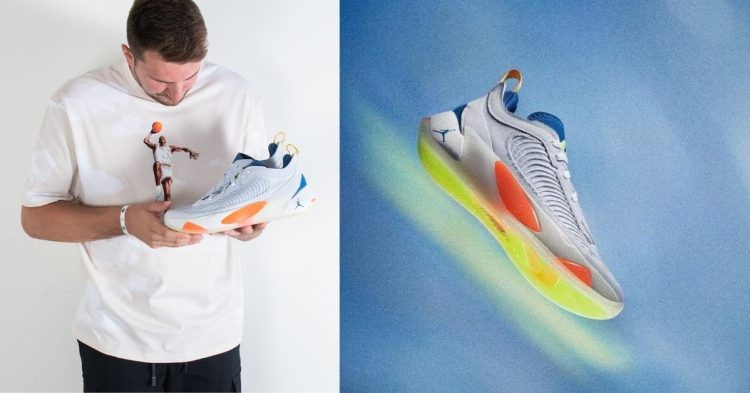 In the NBA, there are many players that have signature shoes with various brands. Having one showcases to the world that you are the real deal. Superstars like LeBron James, Stephen Curry, and Kevin Durant all have signature shoe deals with their respective sports brands. Dallas Mavericks star Luka Doncic is also one of them.

Luka Doncic is busting out a new colorway for his Jordan signature shoes. pic.twitter.com/PnHJ3YphgX

Luka has recent signed with Michael Jordan’s brand for his signature shoe deal. He is one of the stars on the list of players who are with the Jordan brand. Earlier this year, he released his first shoe with Jordan.

After releasing the base model, it seems like Doncic has chosen to pay tribute to his home country Slovenia. When he announced the new model, he told SLAM, “This colorway of my home country Slovenia, it represents its colors. It means a lot to me because it is my hometown. This is a special shoe. The green with the logo. The insole is green. It represents all the green stuff in Slovenia.”

“This colorway of my home country Slovenia, it represents its colors,” he says. “It means a lot to me because it is my hometown. This is a special shoe. The green with the logo. The insole is green. It represents all the green stuff in Slovenia.” pic.twitter.com/gkWB3fRREt

The shoe is currently out in Europe. It will be available to the public from 3rd October later this year. The shoe pays tribute to his country, and also his time with the Real Madrid basketball team. The price of the shoe is expected to be around $110 USD. However, it will only be available at selected Nike outlets. Hence, the prices might rise when sneakerheads start to resell.

The 23-year-old star has been at the top of his game for a years now. He is one of the best players in the NBA at such a young age. And the best part is that Luka is still getting better as time passes. At this rate, he will cement his place at one of the league’s all-time greats.