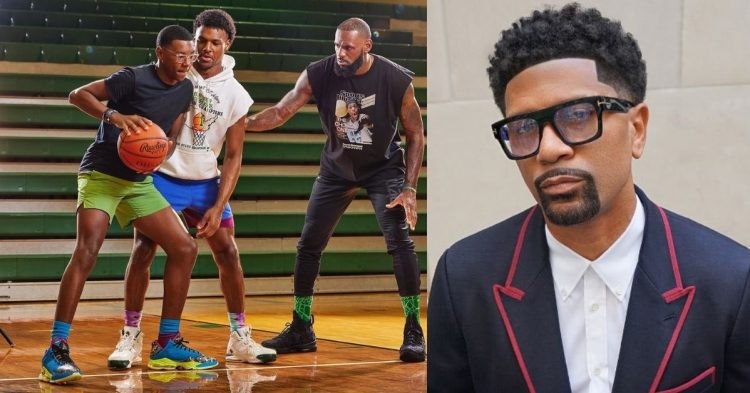 There haven’t been many father-son duos to play in the NBA together. A legend we all know, LeBron James, has made his wish clear: play with both his sons, Bronny and Bryce. He has been mentioning this for as long as we can remember.

LeBron has spoken about playing with his boys to the media for a long time. Many believe its inevitable at this point, considering how talented the younger James boys are. Both Bronny and Bryce played for the first time together this year as they shared the court at the Axe Euro Tour. LeBron reacted to the event on Twitter.

He tweeted, “Man I’m literally watching Bronny and Bryce on the court together for the first time in a game situation!! This is INSANE!! I’m EMOTIONAL AF!! WOW.”

Man I’m literally watching Bronny and Bryce on the court together for the first time in a game situation!! This is INSANE!! I’m EMOTIONAL AF!! WOW

Many have claimed that it may or may not be possible for LeBron to achieve his dream. A former NBA player has expressed his opinion on James’ desire.

Jalen Rose has recently caught the attention of many with his comments. He said, “I wouldn’t put it past LeBron, it depends on what he wants to get accomplished as his career continues to progress. is he gonna be playing for the opportunity to run with them and enjoy the game he loves and play until his 40s? Or it’s his goal to compete for championships?”

“The Lakers have delivered one since LeBron has been there, but based on what I’m seeing right now, they won’t get another one with him,” Rose added.

“Is he gonna be playing for that opportunity to run with them and enjoy the game that he loves… or is his goal to compete for championships?”

Jalen Rose weighs in on the possibility of LeBron James teaming up with Bronny and Bryce in the future 👀pic.twitter.com/HNhIEIpOpT

Jalen made sure to get his facts spot on. In the LeBron has been in LA, the Lakers have only won championship. In the past two seasons, they have failed to make the playoffs. The most disappointing season for the fans would be the latest one. Anthony Davis and King James were struggling with injuries. When they were fit, the team lacked chemistry with Russell Westbrook on the roster as well.

The former Chicago Bulls player also used the example of NFL athletes and how they decided to end their career.

“I think now he’s pivoting his expectation and his vision on what he wants his career to end like. Of course I believe he would’ve wanted it to end and still wants it to end, like a John Elway, where you go out on top. Or Peyton Manning when he was in Denver. I love this for LeBron, I love this for his sons, and it’d be great for the game if it can happen.”

As Jalen said, he thinks LeBron would want to finish his career on a high note. However, the Lakers may not have the facilities for that right now. Hence, it might make sense for LeBron to chase another dream of his, according to Rose.

The King recently signed a lucrative extension with the Lakers, keeping him in LA for two more years. If he wants to play with Bronny and Bryce, he would have to maintain his position at the top to make sure he can sign for another NBA team when he is 40.