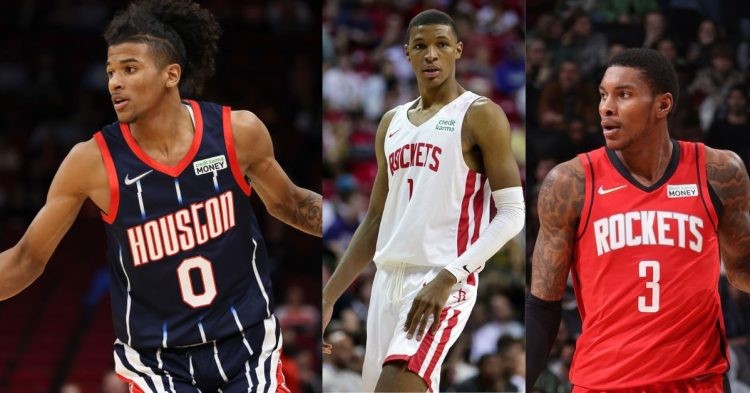 The NBA has a large number of young talents. These players have the ability to single-handedly turn a game upside down. One such player will be the Houston Rockets‘ Jalen Green. The Rockets picked up the 20-year-old at the No.2 pick in the 2021 NBA Draft.

Since joining the NBA, Green has proven he has what it takes to perform at the highest level. In 67 regular season games during his first season, he averaged 17.3 points, 3.4 rebounds, and 2.6 assists. He ended the season on a high note last time around. Jalen made 41 points against the Atlanta Hawks with 3 points and 1 assist. He is part of a young team that has the talented Kevin Porter Jr and the incoming Jabari Smith Jr.

JG4 spoke about the talented rookie in Manila, the country where his descendants are from. He said, “I got a chance to play 5-on-5 with him before I came and started this tour… I really like playing with him. He spaces the floor out so much. That makes me get to the rim, creating for him, and stuff like that. It’s going to work out perfectly.”

“I got a chance to play 5-on-5 with him before I came and started this tour… I really like playing with him. He spaces the floor out so much. That makes me get to the rim, creating for him, and stuff like that. It’s going to work out perfectly.”

Jabari has been decent for the Rockets in the 2022 Summer League. He averaged 15.0 points, 8.8 rebounds, 1.8 assists, and 1.3 blocks in his 4 games. Although his numbers may not be extraordinary, they are still quite good for a rookie. The 19-year-old has showcased what he can do with the right training and guidance. He has also revealed in the past that Kevin Durant and Jayson Tatum inspired his play style.

Jalen Green also spoke about the future of the Houston Rockets team in an interview with CNN Philippines. He said, “I’m just excited for the whole run, the whole rebuild. Like you said we’re a young team, we’re in the middle of a rebuild. We try to make sure everyone has the same mindset to learn how to win and just take it day by day, just to get better, be the best version of themselves.”

“No matter if it’s going to be two years, three years, next year, I just want every fan out there to be patient with us. We’re working, we’re in a lab, we’re gonna make sure this happens as soon as possible”, Green also mentioned.

The interviewer mentioned the likes of Jabari Smith Jr and Kevin Porter Jr among others as the young pillars of the team. The Rockets finished last in the Western Conference table with a record of 20-62. As Jalen mentioned, they are a team going through a rebuild.

They have the talent in their roster with the right mindset. However, they would have to focus on building on their form and winning one game at a time. Despite the ages of the players, they have the maturity to prioritize the win, just like Jalen himself. With the right guidance from the coaches and board, the Rockets can move forward to greater things.