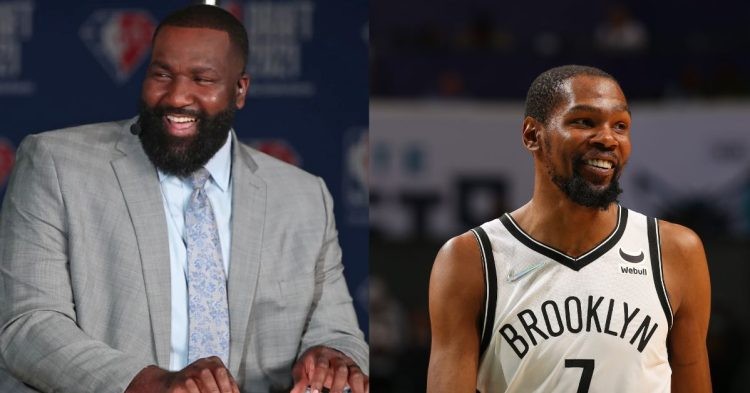 The Kevin Durant saga has finally come to an end. The Brooklyn Nets announced that they have managed to come to an agreement with KD for him to stay. If we’re being honest, we did expect this to be the case at all. Durant’s intentions became clear when he provided Nets owner Joe Tsai with an ultimatum.

After the announcement, the NBA world went into a frenzy. This has been the longest trade saga so far. Many have commented on Durant being forced to stay. But will he be able to win another ring with the Nets next season? Their roster does have talented players but are they enough to be a contender? They will also have an injury-free Ben Simmons on their team. The Nets are finally starting to look dangerous.

After the news, popular TV presenter Kendrick Perkins decided to have another jibe at the American for his trade request and demands.

He said, “KD don’t have the power. KD don’t have the juice. So what happened? He tried to request a trade, nothing happened. He tried to get Steve Nash and Sean Marks fired, nothing happened. So all of a sudden, guess what training camp is coming to a near, he figured teams are not willing to part with young superstars like a team like the New Orleans Pelicans that’s not willing to part with Brandon Ingram.”

“It’s all of a sudden KD had to figure things out so you know what, ‘now I gotta take this meeting, now I have to go with Rich Kleiman, walk up in the office and look these guys in the eyes and say ‘let’s figure this out. How can they figure it out? I don’t know, because the trust is broken. This is just an example that KD is not as powerful as he think he is,” Perkins continued.

What Perkins said may be right in a way. Durant did try a move on Tsai when he said he will not be on the same team as Steve Nash and Sean Marks. He tried to use his power as a player to gain leverage and get rid of the people who he did not favor. However, that move backfired and Tsai announced that he will choose Nash’s side.

This hasn’t been the only time Perkins has taken a dig at Durant. When he initially submitted a trade request, he said that the 33-year-old was only doing this as a “scare tactic“. According to Perkins, Durant wanted to help Kyrie Irving force a move at the time as well. Currently, both Kyrie and KD will play for the Brooklyn Nets in the 2022-23 season.