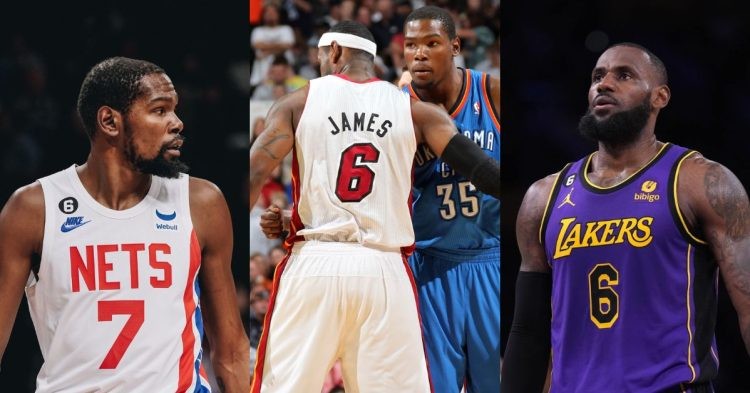 Kevin Durant is truly a legend in the game of basketball. The man has won 2 Finals MVPs and 1 Regular season MVP, all while being regarded as one of the best scorers in NBA history. Durant believes that he has done it all and is only focused on Winning more rings and helping his young guys develop. Recently, he joined LeBron as only the 2nd player in the league currently to have 26,000 career points.

They both reached that mark in the same amount of games: 955 🤯 pic.twitter.com/pkQVYGM524

The most interesting thing about this is that, while doing so KD also took the same number of games to achieve this that LeBron did, which is 955 games. Durant is hot on LeBron’s tail and is looking to catch up to him at some point in the future. Though, the journey ahead for him is gonna be a very long one.

LeBron is a player that is known widely for his longevity. The man up until he left Cleveland had barely missed any games in his entire career. However, for him to be fit and hit 26,000 points is not as impressive as Durant’s achievement.

Because when Durant did it, he had recently come back from one of the most gruesome injuries. So, KD coming back after that injury and achieving this feat within the same number of games is a testament to how good of a baller Kevin Durant really is.

This hella impressive considering Durant missed so much more time due to injury up until that milestone while Bron was an iron man and didn’t really miss games. Salute greatness! https://t.co/9e847dq7Zl

Apart from breaking records, KD has also been maintaining records. With Kyrie Irving out and with Ben Simmons not playing KD has put the entire team on his back. KD is on the path to a top 5 all-time spot. If he can carry this team to some level of competition then Durant will surely go down as the greatest Net.

The Important thing to see now is how the Nets will prepare themselves. Without Kyrie, and Simmons Durant will have to carry the load offensively again. If this keeps up then we might just get a legendary season out of KD.