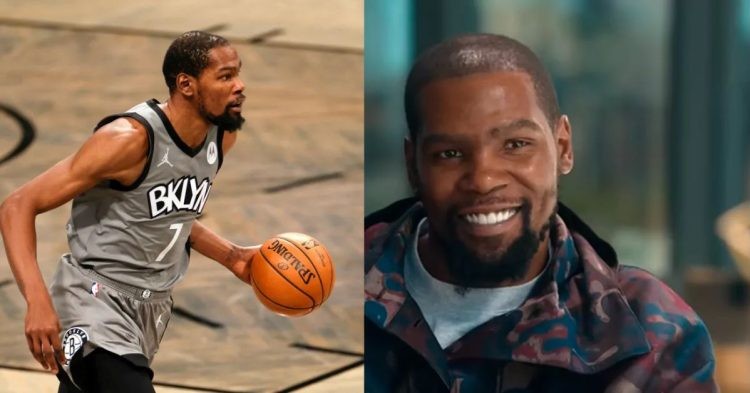 Kevin Durant on the court and in an interview (Credit- Twitter)

Marijuana or “weed” is a plant-based substance that people smoke in order to get high. One must wonder whether athletes like Kevin Durant consume the substance while also having an NBA career. The league initially introduced policies to test players randomly to check if they are clean. However, over the past few years, these same policies have been relaxed.

Some people even look to do away with marijuana testing. After all, it is not nearly as damaging as Cocaine, Heroin, or other types of synthetic drugs. Therefore, banning testing for weed altogether has gained momentum over the past few years. KD was asked about his stance on this issue and his business endeavors in an interview with David Letterman.

With so much opportunity for growth of cannabis in the sports world, I’m looking forward to partnering with @weedmaps. More soon.. @boardroom @35ventures https://t.co/I4NeTvy3nn

There are several ways to look at this somewhat controversial issue. The line between a recreational weed smoker and a full-out pothead has been blurred by society. Some substances such as tobacco and alcohol are accepted while displaying similar addictive properties to drugs like marijuana. Therefore, one must wonder why NBA athletes are allowed to consume some substances during the season but others could result in bans and fines.

This is simply because of the narrative surrounding weed. It is still looked at as the wrong thing to do despite being legalized and regulated in several states in the U.S. Kevin Durant explained how he hopes to change this very narrative.

“We partnered with Weedmaps. We partner with them on content and are trying to figure out ways to change the narrative around athletes and marijuana. It’s confusing to a lot of people. You can look around this city, maybe in a year or two, there’s gonna be dispensaries everywhere where you can actually go buy weed. It’s even crazier that you have people in jail for 20 years for maybe selling a pound.”

David Letterman then asked him when he began smoking weed and whether it was when KD was a child. He also asked Durant how it feels to get high, and received an interesting response from the 2X NBA champion.

“Nah I mean if you call 22 a kid… To me, it clears the distractions out of your brain a little bit and settles you down. It’s like having a glass of wine….. Yeah, I’m actually high right now.”

Despite being an adult, any morally oriented person would be shocked that Durant admitted to being high openly in a public interview. However, KD is a business partner with “Weedmaps“, a tech company serving the Cannabis industry and helping people find legal dispensaries to buy the substance.

We must wonder whether this discrimination amongst substances should continue. On one hand, we have LeBron James supporting and drinking Lobos, a kind of tequila, right in the middle of the season. On the other, we have people like Brittney Griner who attempted to procure it illegally and are paying the price. This is what Durant hopes to change with his involvement in this industry.