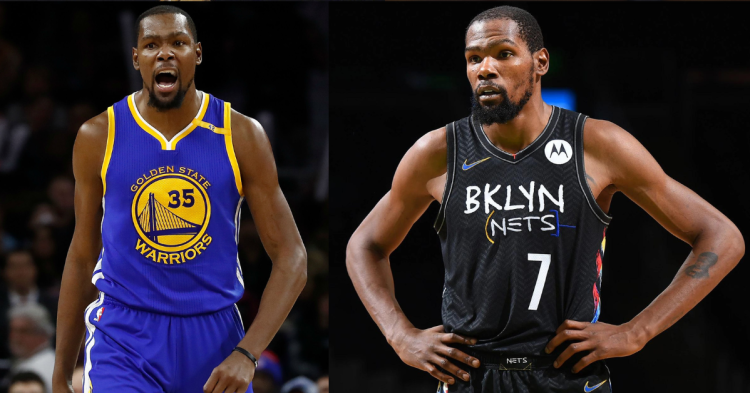 Kevin Durant before and after trade from GSW (Credit: Twitter)

After a turbulent offseason in which he requested and then rejected a trade. Kevin Durant is expected to play at least one more season with the Brooklyn Nets. The athlete has struggled to enjoy a long postseason run at Barclays Center throughout his time with the Nets, going through ups and downs during that time.

KD had a difficult summer as he sought to leave the organization. But no one was willing to give in to the Nets’ demands, so the team decided to move forward with KD. Who is now clearly a legitimate title contender. As per typical, Durant faced a great deal of backlash for this choice.

Many attacked him for making the same move he did in Oklahoma City Thunder by joining the Golden State Warriors in 2016. KD has received criticism from many fans for this, but he never hesitates to respond.

Kevin Durant facing backlash of fans due to trade request

In spite of criticism for how he handled the Brooklyn Nets’ offseason trade request, Kevin Durant isn’t giving in.

Durant was tipped to a tweet on Sunday that implied his trade gambit would be unfavorable to incoming players. The tweet argued that because Durant and Kyrie Irving made organizational demands backed by trade threats so soon after signing significant contracts with the Nets. The future CBA negotiations will aim to reduce player power.

@KDTrey5 definitely messing with the future generation of NBA players. All the sheninagins Kyrie and KD have demanded the Nets do and then he wants out right after signing will all affect the next CBA.

His preferred social media platform for interacting with fans. Sometimes trolling them and also using all of his might to ruin them is Twitter. Someone criticized KD on Sunday, claiming that his actions are “messing up with the future generation of NBA players.”

In his mocking response, Durant implied that this is simply the most recent criticism that holds him and Kyrie Irving responsible for the league’s issues.

Durant might be on to something, at least partially. Before Durant did anything, the ball had already started rolling. If owners were going to want more protection against trade demands during future CBA negotiations.

This offseason, Durant has received criticism from a variety of sources on how he handled his trade demand. He hasn’t really benefited from responding to the criticism, but that’s just how he’s always been.

This is yet more indication that he is not a fan favorite. Anyone with the opportunity to criticize him will do so. Regardless of whether you agree with him or not, he will always respond, and KD won’t stop doing this.

The reason would be to let the public know that he is over this summer’s debacle. In addition to that, KD is now focused on helping the Nets win the NBA championship in the 2022-23 NBA season together with Kyrie.