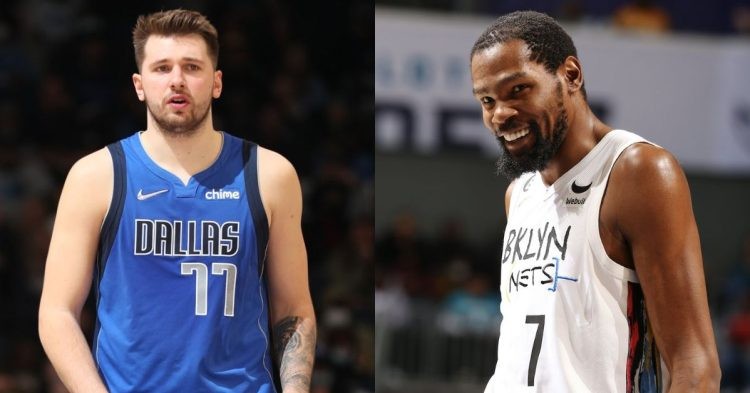 Luka Doncic has been the talk of the town this season. The NBA has been left baffled by the numbers he has put up this year and it looks like he is only going to get better. The Slovenian has impressed other NBA stars such as LeBron James, Stephen Curry, Giannis Antetokounmpo, and many more. However, one star that wasn’t fazed by Luka Magic was Brooklyn Nets star Kevin Durant.

KD doesn’t always appreciate his opponents, but he has saved his praises for only the best. There has been an instance where Durant has appreciated Luka for his game, and how the Dallas Mavericks star caught his attention.

What did Luka Doncic do that impressed Kevin Durant?

Durant said on the Boardroom podcast, “I love his game. At first, I didn’t, because I thought ‘all it is is step back threes,’ like, ‘this is the guy?’ But playing against him one time they beat us by 40 when I was with Golden State, and he was controlling every possession. I was like, ‘yeah, he nice.'”

The game that KD refers to is when Luka was a rookie. The Golden State Warriors played against the Dallas Mavericks on March 23, 2019, at the Oracle Arena. That night, Doncic sent a statement to the rest of the league. The Mavs won the game by 35 points. Although it wasn’t the 40 that KD mentioned, the Texas-based franchise still won the game by a huge margin.

Mavs legend Dirk Nowitzki put up 21 points, together with 5 rebounds and 1 assist. It was a collective effort from the team, as Ryan Broekhoff and Maxi Kleber also contributed with 17 and 16 points respectively. However, all eyes were on a young Luka, who put up a triple-double that game. He ended the night with 23 points, 11 rebounds, and 10 assists. He also had 3 steals in that game.

As Durant mentioned, Luka played a pivotal role in that game for the Mavs. Rick Carlisle’s men ran the plays through Luka, which paid off in the end. He dictated the game with his passing and vision, as well as 42.9% FG.

Luka went on to win the Rookie of The Year award and has become one of the best players in the league right now. His performances have led the NBA world to compare his numbers with the great LeBron James. Not only that, he seems to be making his case stronger to be one of the league’s best players in history by putting up similar numbers as Michael Jordan as well.

KD, along with the rest of the NBA, has become a fan of the Slovenian. It’s not every day that you impress your opponents, the biggest athletes in the world with your game. The way Luka has burst onto the scene surely suggests that we are in for a treat in the future, mainly because of how he’s going to bag awards and break record by record.