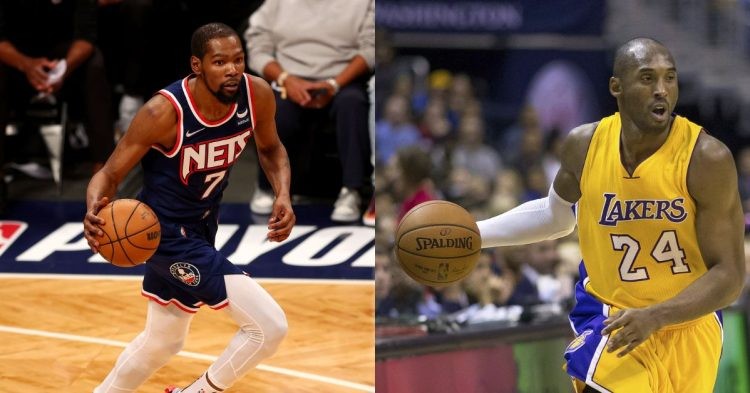 The NBA world was curious when Kevin Durant requested a meeting with Brooklyn Nets owner Joe Tsai. Curiosity turned to shock when we all found out Durant asked that two members of management be removed. Nets’ coach Steve Nash and general manager Sean Marks. There have been several instances of NBA superstars forcing their ways out of unfavorable situations. Be that as it may, it is something else for KD to leverage the remainder of his contract for a change in management.

Joe Tsai sent out a tweet later voicing his support for the Nets staff Clearly, no one saw this management issue curveball coming. Some experts compare the situation the Nets are in with KD to what the Lakers went through with Kobe Bryant in 2007. Not many of the current-day fans were avidly following the league 15 years ago. Therefore, it is unclear what Bryant went through and how this is similar to Durant’s situation.

Kobe Bryant is a 5x NBA champion. He won 3 NBA titles to threepeat with Shaquille O’Neal and the Los Angeles Lakers. Several years later, he carried his team to 2 more titles in 2008 and 2010 respectively.

Few of us know that Kobe Bryant was very unhappy with the Lakers at the time and demanded a trade. This was because they only managed to clinch the 7th seed and were eliminated by Steve Nash and the Phoenix Suns in just 5 games. He demanded a trade but the team was unable to find a fair deal.

Kobe decided to be patient and not do something dramatic to force his way out. He was heavily rewarded as the LA Lakers were able to make it to the NBA Finals the very next year and win the 2008 NBA title. NBA expert Brian Windhorst compared the situation Kobe was in, to Durant’s current predicament.

“This could take the same path that the Kobe Bryant trade demand happened back in 2007. Which is Kobe we remember him saying I’m not going to play another game in a Lakers uniform. They couldn’t find trade and they ended up making the finals the following year. That was the path that the Nets were on and Durant’s basically said that’s not going to fly at least for today. I mean this situation could obviously change in a month, but he’s basically said I’m not going to go the Kobe path. I’m not just going to accept my situation and hope that things eventually change I still want out of here.”

It is highly unlikely for Durant to stay patient and committed to the Brooklyn Nets.  Joe Tsai seems to have taken the side of his staff on this issue. Therefore, we might see KD force his way out.