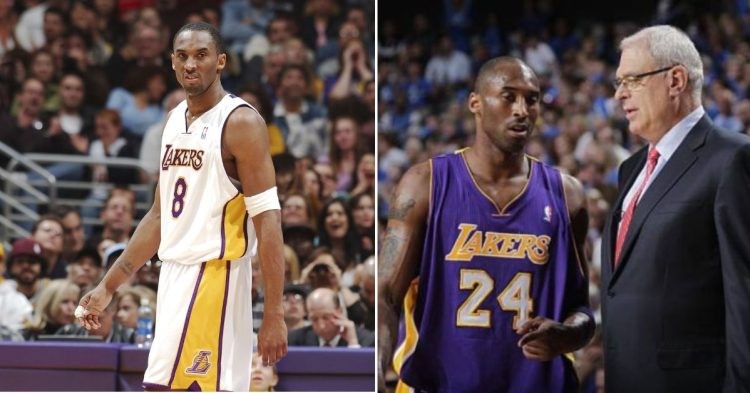 Many of us might remember the day when Kobe Bryant scored 81 points, the second-highest in NBA history after Wilt Chamberlain‘s 100. The 81 points were made by Kobe in the game against the Toronto Raptors in January 2006. Kobe went for 28-for-46 from the field and 7-for-13 from beyond the arc.

However, with Kobe Bryant’s 81 scores made in 2006, some interesting facts came up regarding the game which led to a debate. According to John Salley, NBA coach Phil Jackson benched Kobe Bryant to prevent him from scoring 100. Thus, to know more in detail let’s take a look into the matter.

Was Kobe Bryant prevented from scoring more than 81 points?

Former NBA champion John Salley’s claims about the 2006 game speculated a question for NBA fans. In a podcast interview with NFL legend Shannon Sharpe on his Club Shay Shay, he revealed that Phil Jackson benched Kobe Bryant in the game to prevent him from scoring 100.

“You’re going to be really mad…Phil Jackson once told me: ‘Some records need to stand.’” pic.twitter.com/jYGvVRimGg

He further revealed that Jackson told him “some records need to stand”. According to the statement, Jackson purposefully benched him to maintain the legacy and longevity of Wilt Chamberlain’s record.

On 2 March 1962, Wilt Chamberlain’s 100 points scored for the Philadelphia 76ers vs Warriors game 1962 is considered one of the highest scores in NBA history made. But for former player John Salley, Bryant could have surpassed Chamberlain if Jackson hadn’t purposefully withdrawn him.

However, Phill Jackson was a former Lakers player and Kobe’s teammate after his draft on 11 June 1999. They had many successes together and while playing alongside Shaquille O’Neal, they created a leading edge for the Lakers in the 2000 to 2002 season.

Since that epic show in 2006, some NBA players did come close to matching Bryant’s 81-point total. It includes Phoenix Suns guard Devin Booker who recorded 70 points against the Boston Celtics in 2017. Following the 81 points in 2006, a year later, Kobe scored 65 points against the Portland Trail Blazers. Apart from this, Dallas Mavericks player Luka Doncic recently scored 60 points against the New York Knicks.

60-21-10 on 67% while also perfectly executing the “missed free throw, get the rebound, make the put back” to force OT absolutely puts that in the running for greatest regular season performances in NBA history, alongside Wilt’s 100 & Kobe’s 81.

Impossible what Luka just did.

Thus, the score by Luka is considered to be a of the finest to be made in the history of the NBA The score will be a remembrance along with the scores of former players like Chamberlain’s 100 and Kobe’s 81.