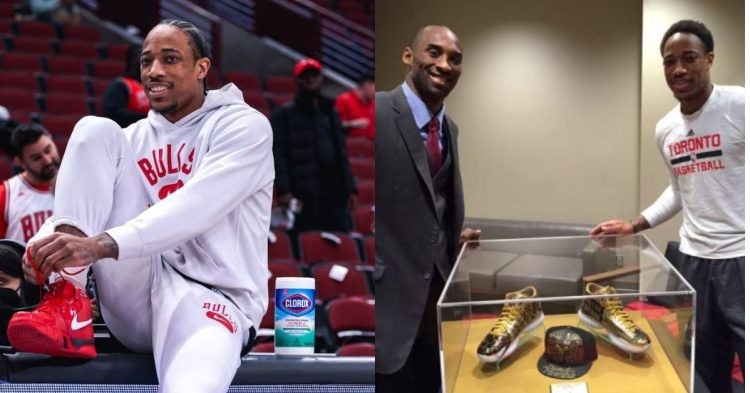 We all know who the late great Kobe Bryant was. He was a 5x NBA champion with the Los Angeles Lakers and arguably one of the most skilled players to ever touch a basketball. Bryant was also a mentor or close friend to several players in the league. DeMar DeRozan, Kyrie Irving, Jayson Tatum, and Luka Doncic are all known to be affiliated with Bryant. Moreover, DeMar has recently signed a deal with Nike and is symbolically following in Kobe’s footsteps.

Some NBA players have deals with companies such as Adidas or Nike and have signature shoe deals. Only the true stars in the league have these contracts as they attract a significant amount of fan attention. There is no arguing that DeRozan is a star of the league. Additionally, he has worn several Kobe’s and is attached to the complete collection.

Did Kobe Bryant play a role in the Bulls star deciding to switch from Adidas to Nike? After all, Adidas is another significant shoe company that several athletes represent. It is important to know the story now that the new contract is a done deal.

One should wonder whether DeRozan’s basketball game is the most similar to Kobe Bryant’s. They are both known for their preference for mid-range shots. Considering Demar is only 32 years old, he grew up watching the late Kobe Bryant and Shaquille O’Neal win 3 NBA titles in a row. He revealed that he idolized Kobe from the very beginning to the extent that he even changed his shoe of preference when Nike released the “Kobe Crazy 8″.

“Yeah, I was into Adidas back when I was young, with Kobe being my favorite player and wanting to wear the Crazy 8’s. It started from there and just transitioned over once he went to Nike and started wearing Huaraches.”

DeMar was asked in which year he specifically switched over, forcing him to try to be accurate, “This goes back to my high school days during my junior year or senior year. I think I was the first person to have Nike ID Kobe’s and I had them in my high school colors. I had a whole bunch of them, I made it a habit to wear a Kobe every game.”

He has finally become the face of a shoe line for a player he has idolized. This has to be a good feeling and we hope he is able to keep the brand alive.