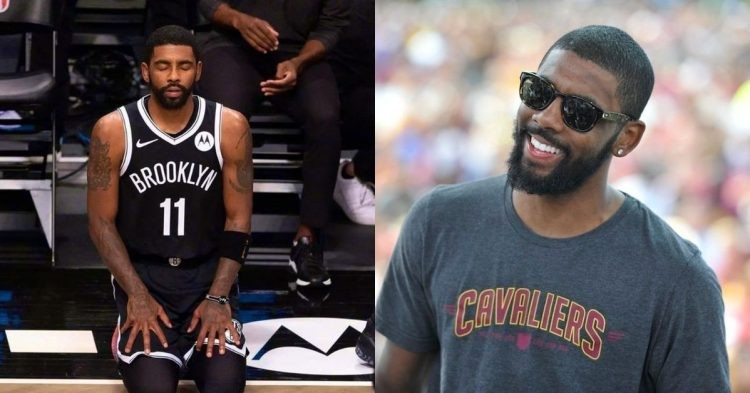 Kyrie Irving of the Brooklyn Nets and Kyrie Irving during his Cavs days. (Picture Credit - Twitter)

Kyrie Irving does not have any filter when it comes to his beliefs. Irving is a favorite of the media as he keeps feeding them content whenever he talks about something he believes in.

Kyrie has always been appreciated for his achievements with LeBron James and the Cleveland Cavaliers. Another thing that Kyrie is famous for is being a flat earther, Irving firmly believes that the earth is flat and will stand his ground about the same. But, the most astonishing belief that Kyrie has ever made public is when he said that Christmas isn’t a holiday.

Kyrie Irving does not think of Christmas as a holiday, still excited to play in front of Boston fans on holiday. pic.twitter.com/EDnAA0nsin

Here’s what Kyrie had to say before he played on Christmas day. “I mean, the hoopla of Christmas doesn’t really—I don’t get into that. I don’t really necessarily think of Christmas as a holiday, so, I’m just happy that I get to be with my family”

Well, we can’t really say anything about his beliefs though, one reason for Kyrie not thinking of Christmas as a holiday could be because of his religion. Let’s have a look at Kyrie’s religious beliefs.

What is Kyrie Irving’s religion?

Kyrie Irving is a Muslim by faith. Though he doesn’t like to be associated with just one religion. Here’s what Kyrie has to say about his religious beliefs “I embrace and want to learn from all walks of life and religions.” When Kyrie came out he did it without any media coverage at all, Kyrie only said this after his switch to Islam. “All praise is due to God, Allah, for this. … For me, in terms of my faith and what I believe in, being part of the Muslim community, being committed to Islam, and also just being committed to all races and cultures, religions, just having an understanding and respect. I just want to put that as a foundation.”

“Don’t argue with Christians & Jews except in a way that is best. “We believe in what is revealed to us & revealed to you. Our God & your God is one; we are Muslims submitting to Him.”

Kyrie also made headlines after he got down on his knees to pray before a game.

Say whatever you want about Kyrie, but you can’t take away the fact that he is an NBA champion.  Kyrie will always be remembered for the star that he is and his achievements speak for themselves. It’ll be interesting to see how his stint with Kevin Durant, Ben Simmons, and the Brooklyn Nets plays out with the Brooklyn Nets.
Tags: Brooklyn NetsKyrie Irving
Previous Post