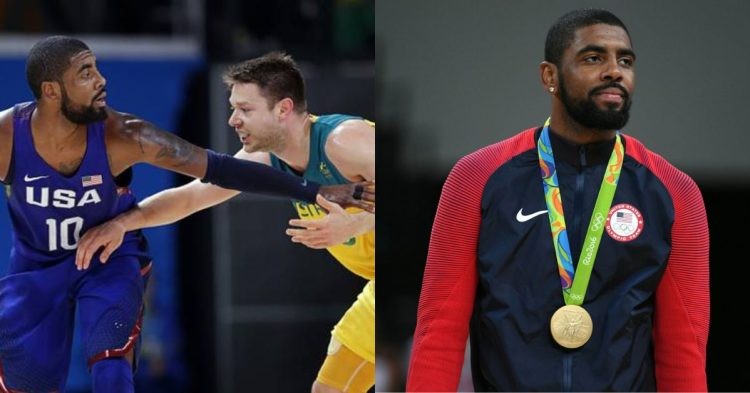 Basketball is a sport dominated by the United States of America. They could win every international tournament if they want to just because of the level of talent they house. They also host the greatest basketball league in the world with the NBA, NCAA, and the NBA G-League. But with the new era of international basketball, does Kyrie Irving play for Team USA or Team Australia?

Giannis Antetokounmpo, Luka Doncic, Joel Embiid, Nikola Jokic, Rudy Gobert are just some of the big names that have shifted the talent scales in the league.

Every name on that list is award winners and all-NBA caliber players. They have been born, brought up, and even represented their country on the biggest stage. But what about Kyrie Irving? A player that is eligible to play for 2 countries.

Is Kyrie Irving Australian or American?

However, Irving being born in Australia was just luck. Kyrie’s dad Drederick Irving played college basketball at Boston University and finished as their all-time leading scorer. He was in Boston University with former Philadelphia coach Brett Brown. At the beginning of his coaching career, he was an assistant coach for the NBL’s Melbourne Tigers and recruited Drederick Irving as one of his two American imports. Kyrie was born in Melbourne in 1992, shortly after his father’s arrival.

Ben Simmons and Kyrie Irving were born in the same city in Australia (Melbourne).

Just a random fact for you.

In his career, he’s had the opportunity to play with some Australian players like Dellavedova, Patty Mills, and potentially Ben Simmons next year. But the success he’s been able to achieve with Team USA will ensure he never changes the team on that front at least.