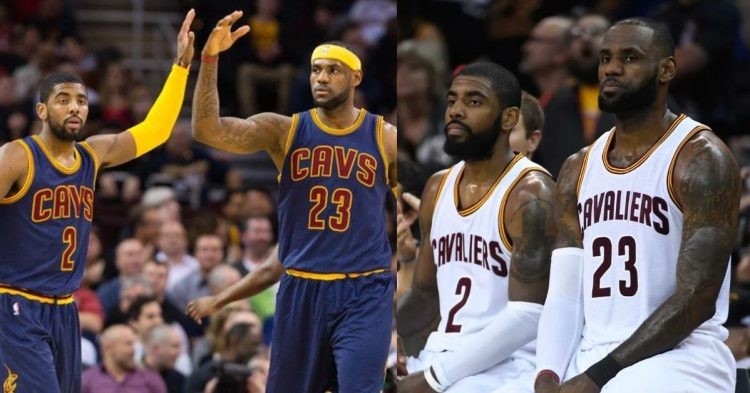 When LeBron James left the Cleveland Cavaliers for the Miami Heat in 2010, Even though Kyrie Irving was the franchise’s great point guard, it wasn’t always simple for him to lead the team into the playoffs and beyond.

Irving described trying to replace James with the Cleveland Cavaliers as an “uncomfortable” experience on the most recent episode of The Shop. He said, “Like, playing with Bron and playing with [Kevin Durant]. These are two of the best to ever lace them up. But within our culture, they are two true icons, and I had to fill in those shoes that were very uncomfortable for me because at that point in my life, I didn’t know where I wanted to go.”

“I was watching the 30 for 30 on the decision. A year later, I was drafted into that Cleveland emotional train of the prodigal son, chosen one has left, and here we have this 19-year-old kid,” Irving added.

The Brooklyn Nets star also mentioned, “I’m 6’2. I’m not jumping out of the gym. Emotionally, I was dealing with things that I had no idea had nothing to do with me. Absolutely nothing. So, when I took on that pressure as my own, I started feeling like, ‘I gotta bring Cleveland back to the promised land.’ That was a solo act.”

In the 2003 NBA Draft, the Cavaliers selected James first overall. As for Kyrie, the Cavs drafted him at first overall in the 2011 NBA Draft. Many expected Irving to restore the Cavaliers to their former grandeur after James left. Additionally, there was a lot of expectation on him to match James’ success given that he was also the first overall pick.

Following the public release of the video clip, Irving’s remarks have received a variety of interpretations. This summer, a potential reunion between “The King” and the LA Lakers and the seven-time All-Star was mentioned. Given what he said, Irving might not be ready to play in James’ shadow once more.

Interestingly, Irving has greater sway over the team while living in Brooklyn Nets’ shadow of Kevin Durant. James and Durant have different personalities, and Irving seems to favor his current partner over “The King.”

Peers and people from other leagues have referred to Kyrie Irving as one of the greatest players in history. His brilliance is obvious because of his flawless handling and almost-perfect rim finishing. The one-time NBA champion has one of the most unique personalities in the league. So, it’s not surprising to see him compare his craft to art.