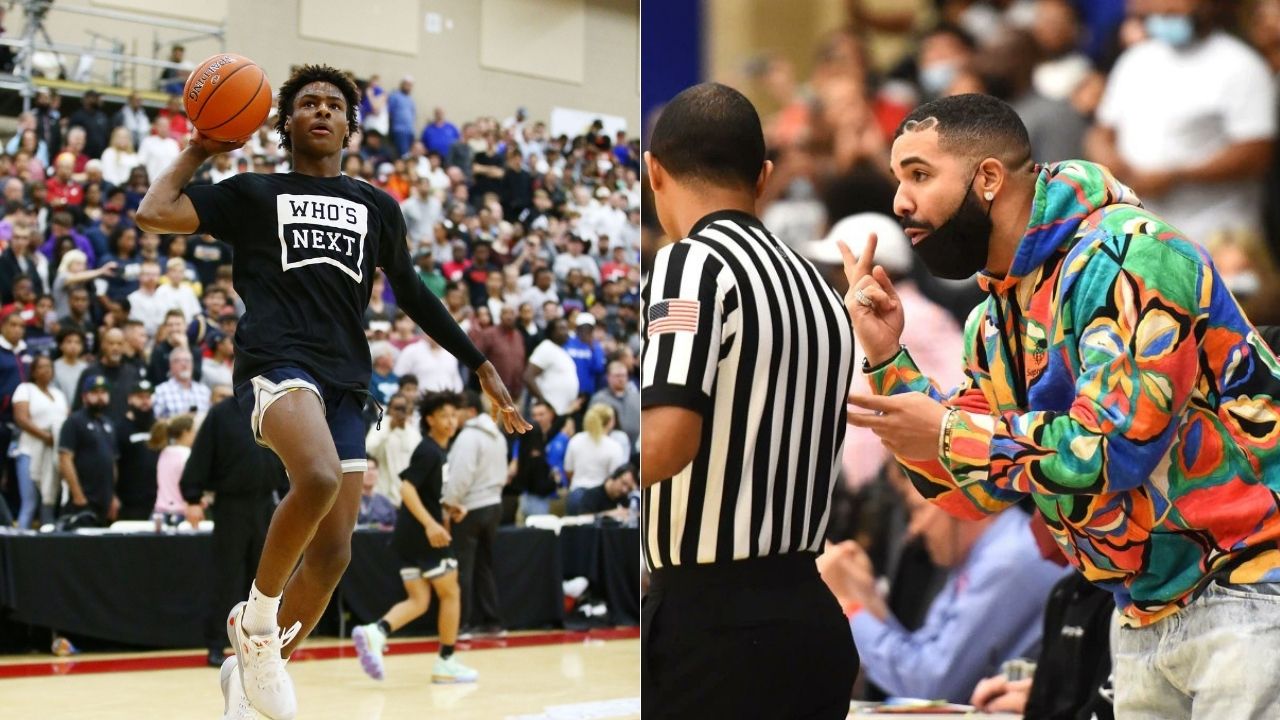 The Open Division Finals saw the young and talented Bronny James make his sophomore debut for the Sierra Canyon High School Basketball team. His comeback after knee surgery was something that his biggest fan could not miss. LeBron James pulled up to cheer for his son and he was accompanied by none other than the Artist Of The Decade, Aubrey Drake Graham and his son Adonis.

King James and Drake Pull Up In Style

LeBron James and the 6ix God walked into a sold-out gym and they walked in with style. Drake was seen wearing a Supreme x Emilio Pucci Hooded sweatshirt with Gallery Department ‘Artifact Fit’ jeans. He finished the outfit off with a Nike Air Jordan 4 ‘Metallic Red’ and the customized Patek.

LeBron came in wearing a simple yet stylish outfit. He was seen sporting a white tee-shirt that read ‘Increase the Peace’. His Chains were a stand out from his outfit.

LeBron might be a king on the basketball court and Drake might be a superstar but at the game in Chatsworth, they were two extremely hyped basketball fans. Just as how LeBron treats Adonis as a nephew, Bronny James is family to Drake.

Although Sierra Canyon lost the game to the Centennial Huskies, they put up a strong fight. Bronny James finished his sophomore debut with 7 points. However, it was the future UCLA basketball player, Amari Bailey who put up a show. Bailey had a total of 33 points and was the reason that Sierra Canyon stayed in the game until the very end. They lost 80-72.

The Amari show had Drizzy and James out of their seats.

OMG AMARI 😤🤬 Even Drake and LeBron jumped out of their seats 🔥 @SCanyonSports pic.twitter.com/7EEeFm96JW

Courtside Drake is a show of its own. Drake continued to be the courtside goof he is even at Bronny’s debut. The referee had to hear words from Drake for making a bad call during the game

Drake has a few words for the ref 😂🔥 pic.twitter.com/zQXNoQzNlq

This is not the first time Drake has had words for referees and players from the sidelines. Even in the NBA, every game Drake shows up to you can count on a video of him going viral. No one can forget the time Drake helped cause a five-second violation during the Bulls and Raptors game.

It was clear that King James and Drake had fun like they always do when they link up. LeBron James also took to Instagram to post a picture with Drake to remember the night.

Also Read: Kevin Durant and Rihanna: The 2017 Rivalry That No One Will Forget