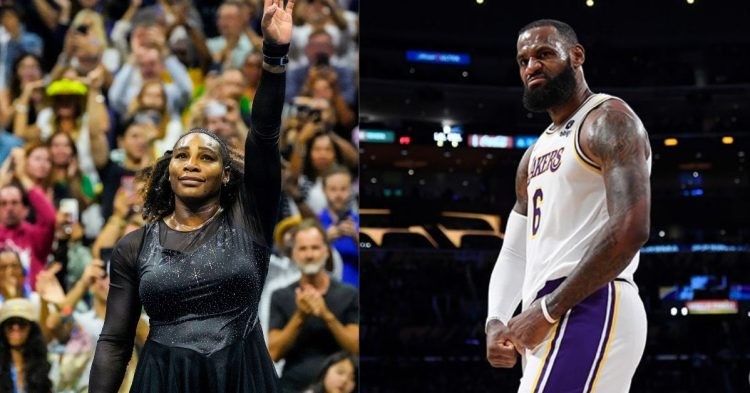 As we all know, LeBron James is one of the best athletes to ever exist. His impact has truly been astonishing in the sport of basketball. At the same time, he has also shown respect for many other athletes for their talent and hard work. One such player would be tennis legend Serena Williams.

LeBron has shown admiration for Serena many times over the years. He has appreciated her contribution to the black community on numerous occasions so far. Recently, when Williams decided to retire after having such a legendary career, the LA Lakers superstar sent her a heartwarming message and paid tribute to her.

The greatest to ever do it! @KingJames reflects on @serenawilliams legacy. #ThankYouSerenapic.twitter.com/0bRLhEsKQS

Once again, the 37-year-old has taken his time to show respect for her. On the latest episode of Uninterrupted, the question for LeBron was what did Serena mean to the sport culture.

He answered, “I mean, just from a dominance standpoint, from a Black girl of power standpoint, with the influence that she has and community for little Black girls, for Black boys as well, just trying to be anything in life. I mean she broke so many barriers, especially in a sport, for our color, that wasn’t looked at. Like, you know you sprinkle in a little bit here, a little bit of there in tennis.”

“But it wasn’t looked at like that. So for her to come in when she came in ’96 or ’97 or whatever, and then she got her sister with her, and they rocking like, not only did it show how great she can be, it could also, you know, siblings fight so much. They showed how siblings can do it together and grind together. And not have no type of animosity to you or you or you or me. You heard what she said. Serena is nothing without Venus,” James added.

The entire world can agree with what LBJ said about Serena. She has been a living example for all the kids that dream of becoming successful one day. Moreover, she has helped the black community believe that they too can achieve every bit of success in their lives. Tennis isn’t a sport that has many black athletes in it. And when Serena came knocking with her sister Venus, they knocked the entire door down.

The Williams sisters have both won various accolades. To date, Venus has 7 Grand Slam Singles titles to her name. In addition to that, she has also won 14 Grand Slam doubles titles and three doubles gold medals at the Olympics with Serena. After her retirement, she made sure to thank her sister, saying “I wouldn’t be Serena if there wasn’t Venus. So thank you, Venus”.

A speech worth of the 🐐@serenawilliams | #USOpen pic.twitter.com/0twItGF0jq

LeBron made sure to include Venus in his statement as he praised the pair for their impact on a sport that hasn’t seen many black athletes come up the ranks. As James mentioned, the Williams have been an example to the rest of the world.