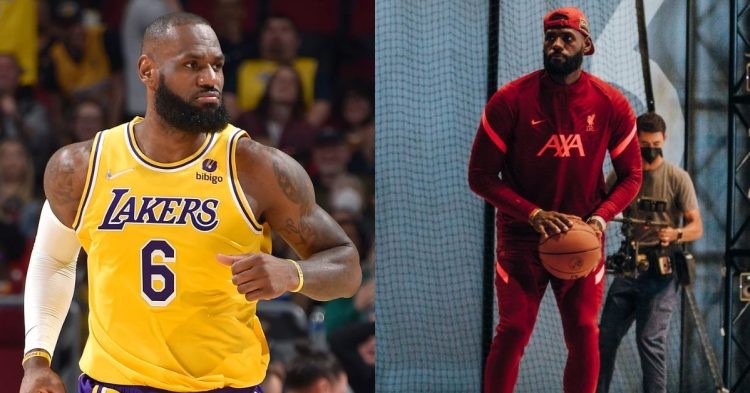 LeBron James is one of the greatest NBA players we’ve ever seen. Apart from basketball, LeBron is also heavily involved in the sport of soccer. The entire world might know this already, but what is his favorite soccer team?

There is no doubt that King James’ favorite team is Liverpool FC. The 19x league champions have managed to attract the eyes of the 4x NBA champion, but what is the reason? As we all know, LeBron owns a stake in the club, which he bought many years ago.

How much money has LeBron James invested in Liverpool?

The LA Lakers star bought a stake in the club in 2011. This was the time when he was playing for the Miami Heat. He paid $6.5 million for a 2% stake in the club. The investment may seem like a small amount, considering the massive rise Liverpool have experienced in recent times. Many reports suggest that his “mere” $6.5m investment is now worth about a staggering $90-100 million.

As we all know, the Fenway Sports Group (FSG) have listed the club for sale. LeBron has a good relationship with the group, so does his business partner, Maverick Carter. It would be interesting to see how the sale plays out for LeBron and his stake in the club. FSG’s decision to list the club for sale has attracted attention from the likes of UFC icon Conor McGregor and Indian billionaire Mukesh Ambani as well.

The former Heat superstar has posted countless images and videos of him online at Anfield. Together with that, he has also rooted for them on multiple occasions. He has been a pillar of support for the team over the years as well. One of the times when he publicly declared his support for Liverpool would be after the club beat Villareal in the UEFA Champions League semifinals.

The win meant that Liverpool would be playing in the finals in Paris, against Real Madrid. The 37-year-old was in attendance that night, as cameras spotted him sipping wine in style during the game.

LeBron drinking wine at the UCL final is a whole mood 🍷

However, unfortunately for LeBron, his favorite club lost to the Madrid-based club that night, and the UCL trophy. Real Madrid won the game 1-0, after the Vinicius Jr sealed the game. Afterward, King James offered the Liverpool players some words of support. He tweeted, “Proud of you guys!! Win, lose, or draw you guys gave it your all this season and we all appreciate it!!#YNWA.”

@LFC Proud of you guys!! Win, lose, or draw you guys gave it your all this season and we all appreciate it!!#YNWA❤️❤️❤️

Judging from his tweets and public support, it would be safe for us to assume that LeBron is indeed a Liverpool fan. However, he may not be having a good time right now, like the other Liverpool fans, since the club is sitting 6th in the EPL table, 7 points off a Top 4 spot.