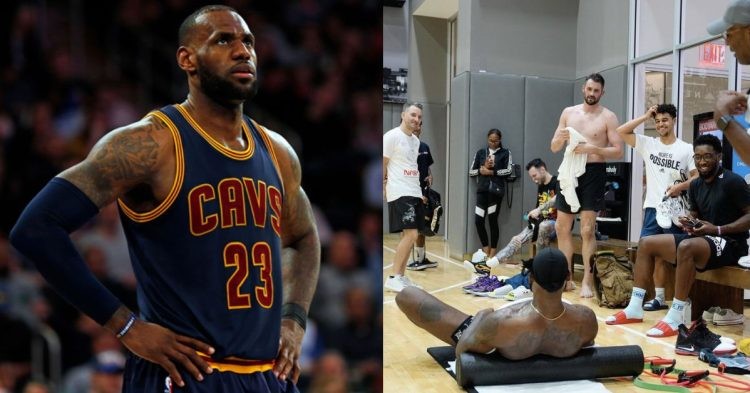 LeBron James has had nothing short of an illustrious career in the NBA. Even before stepping on an NBA court, he was proclaimed “The Chosen One” and has largely lived up to those expectations. The King is currently with the Los Angeles Lakers and failed to make the playoffs last year. There is some reason to believe that returning to the Cleveland Cavaliers and playing alongside Donovan Mitchell may be a possibility.

There are always constant talks of trades, especially regarding NBA superstars. The Cavaliers were LeBron’s first and hometown team. Therefore, they will always remain a potential suitor in the event that James is traded.

Mitchell’s trade to the Cavs from the Utah Jazz stunned the NBA world. We knew the Jazz were rebuilding. But, had no way of knowing the Cavaliers were about to become a contender in the Eastern Conference yet again. Just a few years ago, the Cavs were a dominant powerhouse with LeBron. However, they have fallen into irrelevance since then.

There have been videos of Donovan Mitchell and LeBron James working out alongside other NBA stars this offseason. This is becoming quite a common trend these days. However, it still speaks to the fact that Mitchell and James are quite close.

Moreover, the King has high praises for the Cavs team president Koby Altman,  “I think Koby and those guys have done an unbelievable job drafting and making trades.”

This is certainly true. The Cavs were left for dead by the NBA after LeBron left them heading into the 2019 season. However, they drafted Colin Sexton and Darius Garland. Now, they have traded Sexton for a legitimate star in Mitchell.

One must wonder if LeBron is feeling a sense of De Ja Vu when it comes to returning home. The first time he left the Cavs, he returned after winning championships with the Miami Heat. Additionally, the Cavs had included a talented guard in Kyrie Irving on their roster by then.

LeBron James won a title with the Los Angeles Lakers in 2020. It is unlikely that he win anymore during his time there. Therefore, seeing his old team flourish and recruit attractive talent might just sway his decision. If he does indeed leave the Lakers after his contract expires.