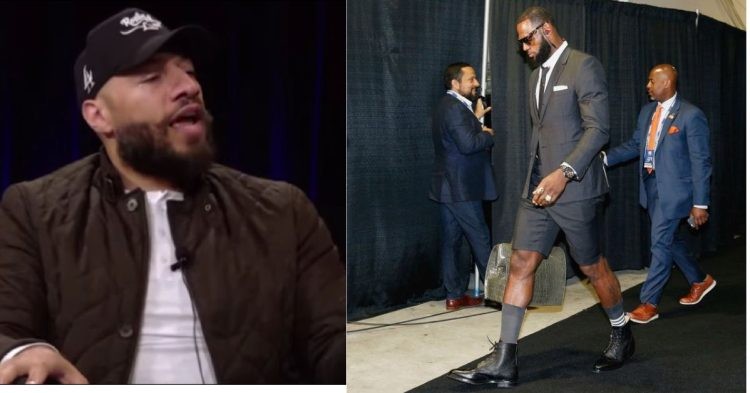 We are all familiar that NBA great LeBron James recently entered the $1 billion club. He is the first NBA player to do so while still playing. After all, being the face of the league or even basketball can make someone quite financially sound.

Most of us assumed that LeBron’s finances came from his earnings through contracts as a player or endorsements However, former NBA player Royce White recently revealed that the King’s hands are not as clean as we presumed. He claims LeBron took a colossal payday to keep silent on crucial humanitarian issues involving concentration camps in China.

We should wonder what Royce White is even talking about and how much truth there could be to it. After all, there is no way anyone will admit to ignoring such forms of inhuman behavior. One might also question how much LeBron’s true net worth could be if these accusations are true.

LeBron James officially has a current net worth of around $1.2 billion dollars

LeBron has clearly done a lot in his life to get to where he is today. However, these accusations by Royce White seem to throw dirt on his money and question the methods he used to get to a $1 billion net worth.

“LeBron James was given a billion dollars by Nike the establishment.  That anti-human neo-liberal Marxist globalist establishment…he was given this billion dollars to keep his mouth shut about the single greatest humanitarian crisis of our generation. That is the 2 million people being placed in concentration camps in China for no other crime than being Muslim. Now he won’t speak on that. Why?”

We should certainly hope that Royce is misinformed and simply trying to create waves. Be that as it may, the question still remains as to why LeBron has not responded to these ugly accusations. That alone might prove there is an inkling of truth in this.

Royce White says @KingJames was paid 1 billion dollars from Nike to keep his mouth shut about the 2 million Uighurs in Chinas concentration camps. 🤔What say you LeBron ? pic.twitter.com/SCDLBsYmmb

“He took the billion because when you’re a radical materialist and you come from Akron Ohio like I come from Minneapolis you measure your success based on what other black people have. And because other black people don’t have a billion dollars he feels that the billion dollars he got is an accomplishment. One that he can hold over y’all and say look at me I’m successful. But it came with a quid pro quo.”

Royce claims that the King got paid by Nike and China for his silence. Amusingly, LeBron still remains silent on this issue and has not made his opinions clear. Thus, if what White is saying has truth to it, then LeBron James has a true net worth greater than $1 billion.