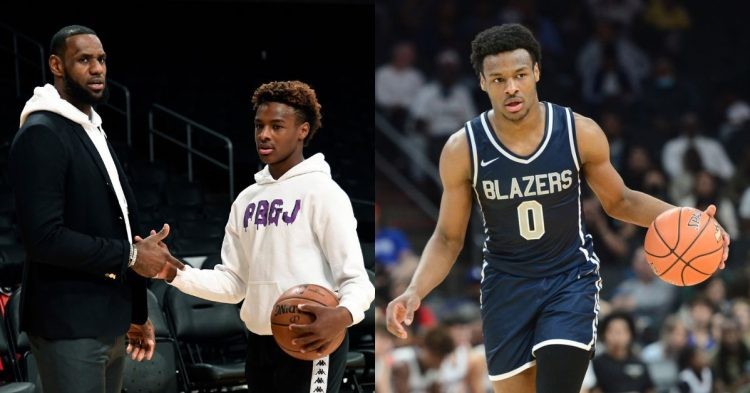 LeBron James is arguably the greatest basketball player of all time. The only player who can come close or even beat him will be the great Michael Jordan. The LA Lakers superstar has won 4 titles till now, with many other countless accolades. Despite all this, LeBron has claimed many times that one of his biggest achievements would be being a father.

Man I’m literally watching Bronny and Bryce on the court together for the first time in a game situation!! This is INSANE!! I’m EMOTIONAL AF!! WOW

When LeBron poured a toast on Fathers’ day this year, he said, “one of the most important roles a man can play is to be a dad. I’m proud to be a dad to my two boys and daughter”. Both his sons, Bronny and Bryce, have taken the basketball world by storm. The brothers recently shared the court for the first time at the Axe Euro Tour.

Bronny, the 17-year-old has reportedly attracted several schools after showing how he good was. He has been a youngster to watch out for, not just on the Euro tour but since he started playing basketball in high school. His dad has responded to a rumor on Twitter that said Oregon was close to acquiring Bronny’s services.

Is Bronny another LeBron James in the making?

King James tweeted, “He hasn’t taken 1 visit yet and has only had a few calls with coaches and universities. When Bronny makes his choice you’ll hear it from him.”

He hasn’t taken 1 visit yet and has only had a few calls with coaches and universities. When Bronny makes his choice you’ll hear it from him. #JamesGang👑 https://t.co/BBciKxl7m8

If we’re being honest, as ridiculous as the rumors are, they are not surprising at all. When you have a player of Bronny’s talent and potential, there will be schools looking to recruit him. Adding on, there will be people looking to advantage of the situation. That isn’t all, the James name is something that gets attention, and that’s what fuels these baseless rumors.

BRONNY JAMES THROWS IT DOWN 🔥 pic.twitter.com/ikJ8ksPVSx

Bronny is already standing at 6 feet 3 in tall at just 17, and he is still growing. His dad’s training to put that size to good use has been paying off till now. He has exploded onto the scene recently, with his monstrous poster dunk in his last game.