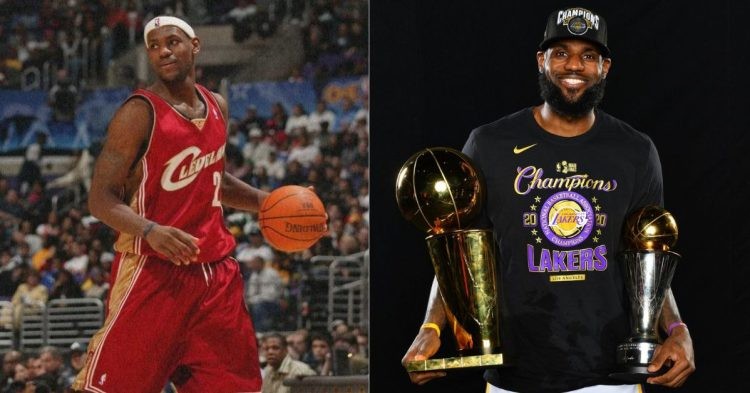 In the NBA, there haven’t been many players better than the great LeBron James. In fact, Michael Jordan is the only player to have a similar legacy to the former Miami Heat star. LeBron has built an empire for himself in the NBA with the number of accolades he has won.

King James has 4 NBA championships currently. He won two rings with the Heat, one each with the Cleveland Cavaliers and the Los Angeles Lakers. Together with that, James also has 4 Finals MVP trophies. His awards show that he has been at the peak of the league for almost two decades now as LeBron enters his 20th year in the league. But how was he as a player during his rookie season?

James came from Akron as a star in high school basketball. When he revealed that he will be entering the NBA Draft, teams were on high alert. LeBron already had the qualities of an NBA star: the size, physical attributes in his game, and his winning mentality even then.

In his rookie season, LeBron averaged 20.9 points, 5.9 assists, and 5.5 rebounds per game. He played 79 games that season. As a rookie, playing that many games are a huge achievement on its own. If that wasn’t enough, he still put up some unbelievable numbers. His statistics helped him to bag the Rookie of The Year award.

The Cavaliers drafted him to be the angel to save them, and he was just that. He did go for an all-white suit at the 2003 draft. In his rookie season, LeBron had 12 double-doubles. Even his haters would agree that those numbers are unbelievable for an established player let alone a rookie. It shows how much of a standard King James was in his first ever season in one of the toughest leagues in the world.

18 YEARS AGO TODAY
The Cavs selected 18-year-old LeBron James with the 1st pick in the 2003 NBA Draft!

The 2022-23 season will be LeBron’s 20th. Saying that he has maintained his position at the top is not an understatement. According to statmuse, the 37-year-old has been averaging more than 20 points a game for 19 straight seasons. And the expectations are no different this year as well. We have to bear in mind that the American is closing down on Kareem Abdul Jabbar’s record for most points scored of all time.

Kareem is currently on 38,387 and LeBron has 37,062 points. To catch up to the former, James would have to only average about 16/17 points per game next season. Bearing in mind that he has never gone below 20 points per game in his career, we can surely expect LeBron to become the top scorer in the NBA unless he faces an unfortunate injury.

His 20th year in the league will look a lot different than his first. The game has changed drastically, as shooting is one of the main qualities players need to have. LeBron did not focus on his shooting when he came to the league. However, he holds his ground against the league’s best in the modern day.