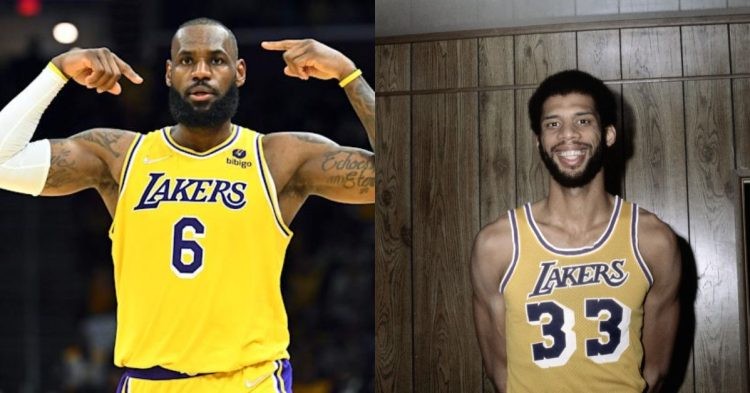 LeBron James and Kareem Abdul Jabbar are two of the greatest NBA players ever. We have all seen King James play as he is a 20-year veteran in the league. A lot of new basketball fans will be unaware of who Kareem is, how he played and what made his physical capabilities were.

Most followers of the NBA know Lebron is an extremely gifted athlete and has been able to dominate in the league for several years now. This is through physical traits such as height, weight, wingspan, and vertical jump. These categories decide the innate potential or “ceiling” of the athlete. Let us compare both the NBA legends and see how they match up.

Young fans need to put the internet to good use and find out how Kareem played. He is the all-time leading scorer in the NBA for good reason. Jabbar was listed at 7’1 and had a signature weapon like no other, the “sky hook“. Just like the name suggests it is a hook shot that was near impossible to reach, let alone block. Additionally, he could rely on this move till the very end of his career as it required significantly less explosiveness.

Height is one of the most important factors in a basketball player. Moreover, James is listed at 6’8, 5 whole inches shorter. Lebron wins on the weight scale as he (250lbs) is a full 25 lbs heavier than Kareem(224lbs).

The creator of the sky hook has a wingspan that is significantly greater than King James‘. Jabbar’s wingspan was listed at almost 101 inches. While LeBron has a wingspan of around 85 inches. Finally, the vertical jump is a true indicator of athletic capability. It was also quite difficult to measure in the past. Therefore, the reports may not be entirely accurate.

Nonetheless, it is said that Kareem had a 40-inch vertical jump, and LeBron has a 44-inch vertical jump. So “The Chosen One” wins in this category as well. However, it is interesting to note that if the reports are accurate, Kareem is still more capable of reaching greater heights in the air as he could propel his large frame well up in the sky.

There are a lot more factors such as speed and strength, which are significantly harder to measure as they are displayed in bursts and at certain moments. The ones mentioned are much easier to calculate and observe.
Tags: Kareem Abdul JabbarLeBron JamesNBA
Previous Post