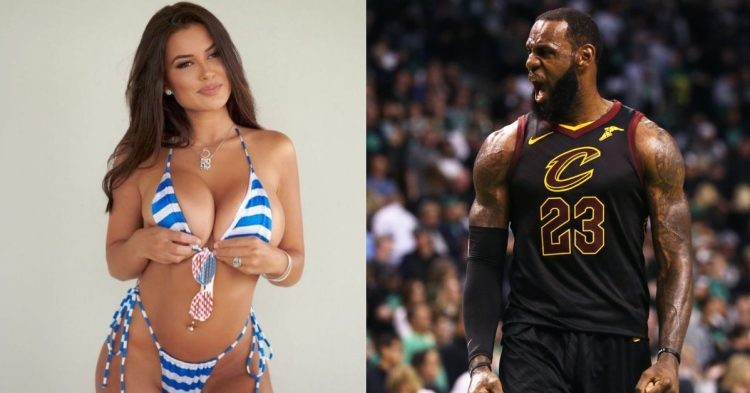 Rachel Bush and LeBron James on the court (Credit: Twitter)

An Instagram model named Rachel Bush once called out LeBron James for sliding into her DMs during his time with the Cleveland Cavaliers. We all know that King James spent the majority of his NBA career playing for the Cavaliers. He won the franchise a coveted NBA championship back in 2016.

While it is certainly possible that Rachel Bush was simply trying to generate publicity, she offered proof that makes the 4x NBA champion’s behavior look quite questionable. Although many years have passed, fans must be interested in knowing what actually happened and how much truth there was to her claims about LeBron.

It is quite common for NBA players to be associated with Instagram models and so on. However, what makes this controversial is the fact that LeBron has been with Savannah from even before his NBA career began. They met and became a couple in 2002. Additionally, they soon had two sons named Bronny and Bryce.

The couple officially got married in 2013. NBA fans will remember that James was playing alongside D-Wade for the Miami Heat at the time. They soon welcomed a daughter into the world a year later in 2014.


Rachel Bush threw a wrench in all of this by accusing  LeBron James of showing interest in her. She took a screenshot of LeBron James sending her a message saying “Hey what’s up?” She then posted it on social media and had NBA fans talking.

At the time even Bush was dating a Football played for the Cleveland Browns called Jordan Poyer. This led to her accusation becoming all the more controversial. Since this happened in 2016, when LeBron was at his absolute prime and one of the undisputed best players in the world, it garnered quite a lot of attention from his fans and others.

Some claimed that she faked the pictures and was making all of them up. Others opined that it was highly unlikely for LeBron James to do something on a social platform. A few people even defended him and claimed that this was an invasion of his privacy.

Since this was all a long time ago, perhaps we should simply put it behind us. There have been several women who have accused LeBron and other NBA stars of controversial acts. While there might be some truth to it in many cases, all King James did was say hi.