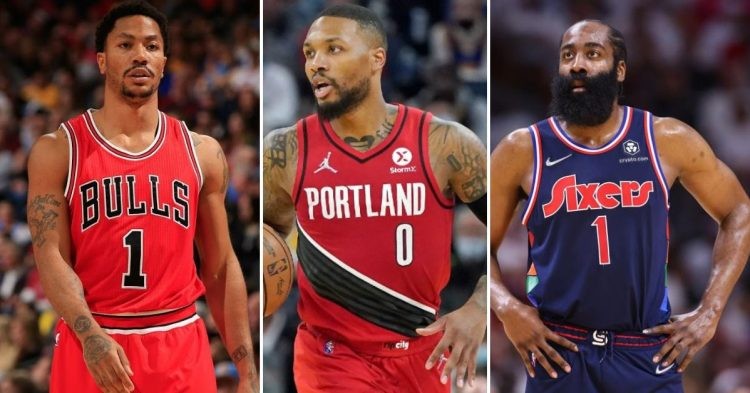 Adidas is one of the popular shoe brands worn by NBA players. It is the second-largest shoe brand in the world. Only Nike is considered a brand with more reach. Moreover, Adidas is the largest sportswear manufacturer throughout Europe.

NBA players, especially the superstars, all have signature shoe deals. Nike may dominate the major shoe deals in the league. However, it is equally important to keep in mind which players have signed shoe deals with Adidas as well.

Who has the most signature shoes with Adidas?

It must be a surprise to many that Derrick Rose has released the most Adidas shoes. This is because injuries have derailed his career. However, sales records show that his shoes never really hit a decline in demand and have always been churned out. His shoes’ prices begin at around $40 for the Adidas Drose 1 and a little more than $100 for the Adidas Drose 11s.

It is also interesting to note that Donovan Mitchell has 3 signature shoes that cost between $37 and $68. Trae Young has just one shoe costing $140.  One must wonder what are the criteria for an organization that decides to make yet another signature shoe due to the demand generated by the athlete.

There have been several theories on what these criteria are over the years. Some believed it had to do with connections outside the league. Others thought it had to do with how deep one’s team was able to go into the playoffs.

It turns out that fan reach and popularity is the major deciding factor in enhancing a signature shoe line. James Harden, whose shoes cost anything between $57 and $199,  and Derrick Rose are the most popular athletes on this list. Additionally, they are also the only players to win a regular-season MVP in the list of athletes endorsing Adidas.

The company clearly felt that accolades draw fans, which in turn draws business. Therefore, making more shoes to cater to a larger fan base is the right call to be made. There are also young stars such as Trae Young, who have only signed their first shoe deal. Therefore, they will have to prove themselves and their worth in the upcoming seasons. That is the best and easiest way for them to increase the value of their signature shoe deals.