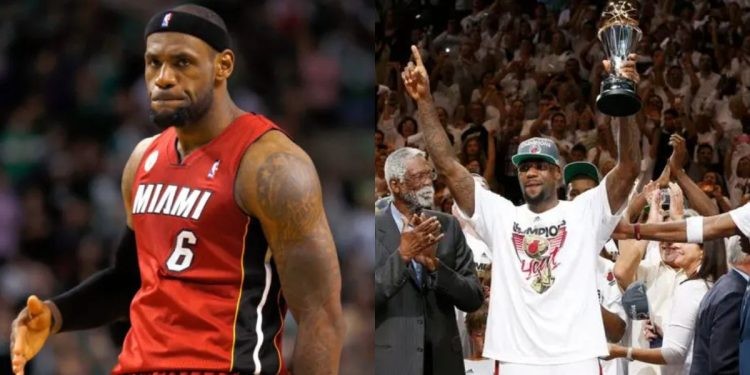 LeBron James won his first title with the Miami Heat in 2012. It has been exactly 10 years since the King won his first of four titles in the league. Therefore, it deserves to be looked back at. The Heat eliminated Kevin Durant and the Oklahoma City Thunder to win the NBA Finals in 5 games.

This was perhaps, the series that gave LeBron the confidence he can get over the hurdle and win a championship. He had gone through a great ordeal to get to that position. Entering the league as “The Chosen One” and being unable to deliver a championship for years put pressure on him.

This was one of LeBron James’ easiest NBA Finals series ever

It is wrong to consider one matchup or series “more difficult” than the other. In any case, a  team has to win 4 games in a best of 7 series to eliminate the opponent. Each team poses its own challenges and threats that have to be dealt with effectively based on matchups, playstyles, and more.

LeBron and the Miami Heat made the 2011 NBA Finals. They were eliminated by Dirk Nowitzki and the Dallas Mavericks within 6 Games. Therefore, the 2012 Finals trip had an element of “must-win” and a sense of urgency.

Thankfully, the Heat could not have asked for a better matchup than the “Baby Thunder“. This refers to the young Oklahoma City trio of Kevin Durant, Russel Westbrook, and James Harden. They were all within 23 years of age heading into their first NBA Finals trip. Unfortunately for them, they were facing a Miami Heat superteam with a prime LeBron James coming off a humiliating loss to the Mavs.

This led to the Heat crushing the Oklahoma City Thunder and winning the series in just 5 games. Moreover, the momentum from this championship spilled onto the next year. The Heat defeated the San Antonio Spurs the following year in 2012 to become back-to-back champions.

The Heat managed to make the NBA Finals all 4 years they had LeBron James. The OKC championship gave him the necessary grit and determination to go 7 games with the San Antonio Spurs dynasty and eventually win. The small wins usually lead to the big ones and the easiest path paved way for tougher battles in the King’s career down the line.