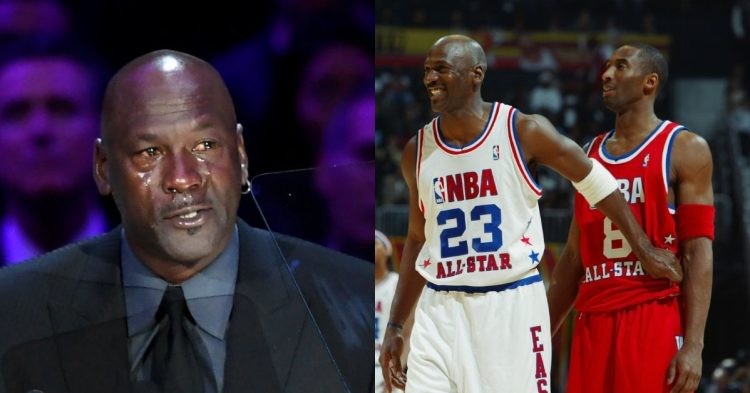 Michael Jordan retired at the end of the 2002-03 NBA season. Since then, he’s become the owner of the Charlotte Hornets and an active presence in the teams’ decisions. With LaMelo Ball leading the team, they seem to be in a great place. With the recent controversy of Miles Bridges, the Hornets are under the microscope. But so far, Jordan and his team are handling this situation well.

Michael and Kobe were almost identical. Kobe and Jordan were 6 foot 6 shooting guards. They had nearly identical form and footwork. Both of them weren’t just some of the greatest scorers in NBA history but also the best defenders. Kobe is a better 3-point shooter than Jordan was but MJ eclipses Kobe with his personal and team achievements.

As competitive as these two are, their bond was stronger than one could envision. Michael Jordan was the big brother to Kobe’s little brother. Kobe would annoy Jordan to pick his brain and was always learning from him.

Michael Jordan had great words for Kobe Bryant in his last game at Charlotte. But this was nothing in comparison to what he said at Kobe Bryant’s funeral.

On 26th January, 2020, news reports emerged of a helicopter crash. The crash led to 9 deaths, 2 of which were Kobe Bryant and his daughter Gianna Bryant. The Lakers, along with Vanessa Bryant, hosted a public memorial for the Laker great, one month after he passed away.

Michael’s words combined with his emotions showcased the love he had for Kobe. What he said, coming from him, meant so much more. Could we ever see a player in the league, that can even come close to Michael like Kobe Bryant did?