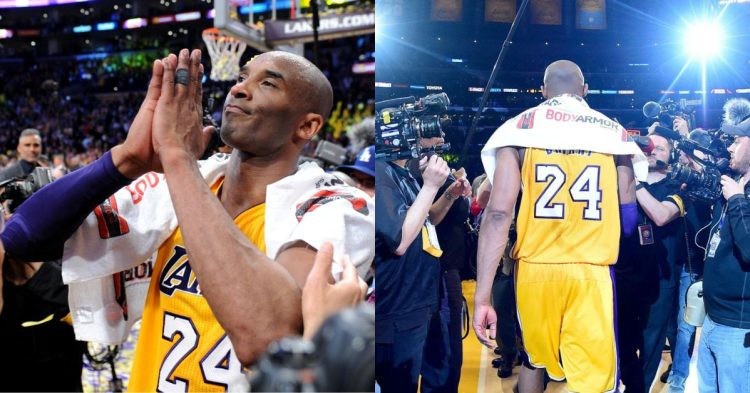 Watching an era of basketball greatness is rare for most NBA fans. There will always be only a handful of players that have that status. But once they’re gone, watching highlights does not give you the same feeling a live reaction would. Fortunately for us, we get to see players like LeBron James dominate the league for years but Kobe Bryant and his farewell tour showcase that it’s never too late for a superstar.

Kobe Bean Bryant was a 2nd generation basketball superstar and the son of Joe ‘Jellybean’ Bryant. His dad played in the league for 8 years but his NBA career ended at the age of 28. Even though the last 3 seasons of his career were the peak where he averaged over double-digit points per game. Kobe began to love the game through his dad which gave us a great career to witness.

Kobe Bryant announced the end with a poem

The Black Mamba was a 5-time NBA champion and a 2-times finals MVP. He was one of the greatest shooting guards in NBA history, 2nd only to MJ. He gave his all through his offense and defensive effort. Bryant was rewarded with 15 All-NBA selections and 13 all-defensive team selections. In 2007-08 he even won his only MVP trophy.

Kobe and Shaq won 3 straight titles together but that harmed more than helped Kobe. He was told constantly that he was in the shadow of Shaq. Kobe felt the need to change that sentiment which may have cost him a couple more years of Shaq’s prime. Yet he continued to persevere and it did work as Kobe won 2 more NBA titles totaling to 5.

After tearing his Achilles, the Black Mamba swished both free throws for the Lakers and walked off the court on his own. pic.twitter.com/LCWDrUCNB0

But there was always a problem, he was now chasing Michael Jordan and his 6 rings. Kobe attempted to beat that too. And he continued to do it till his body kept on failing him. He was pushing 40 but had championship aspirations. Finally, on 29th November 2015, Kobe Bryant announced that he’d retire at the end of the 2015-16 season with a poem titled ‘Dear Basketball.’

From the moment
I started rolling my dad’s tube socks
And shooting imaginary
Game-winning shots
In the Great Western Forum
I knew one thing was real:

In the 2013-15 seasons, he played a combined 41 games. After Kobe tore their Achilles in 2013, the injuries began to pile up. Even his stats took a huge dip. He almost lost half his production and the Los Angeles Lakers lost its appeal. Nobody wanted to help Kobe attempt to win title number 6. So when he announced his retirement, the Lakers may have even let out a sigh of relief.

After making the announcement, the first game he played was in his former hometown of Philadelphia. He scored 20 points but finished with a +/- of -21. This game also set a precedence for what you could expect from this season. He shot 7/26 from the field but continued to shoot to give the fans every point he could muster up.

In every city he played in from then on, he was met with standing ovations and heartwarming videos that would melt your heart. And he responded by putting up shots to give them the ‘Kobe Bryant’ experience. He put up 6 games where he scored over 30 points in the season after that point and contributed to just 11 wins.

Jordan Clarkson had outscored Kobe this season by 50+ points and as beautiful as the highlights were, they lost a lot. However, he did enough for LA that they were willing to let him have that season. Also, from the business side of it, they sold a lot of tickets at premium prices. And tanking even helped them get a high pick in the upcoming draft which would propel the rebuild in the post-Kobe era.

But the only thing everyone remembers from that season was his last game.

On 13th April 2016, the 16-win Los Angeles Lakers took on the 40-win Utah Jazz. Utah should’ve been the clear favorite. But there was not a single human in the world that was not rooting for Kobe and his Los Angeles Lakers. At the half, the Lakers were down by 15 points.

Kobe had 22 points at the half on 22% shooting from the 3 and a +/- of -13. They were force-feeding him the ball and understandably so. But something switched at the half. The moment, the stage, and many other things revived the prime Mamba Mentality. In just the 3rd quarter he attempted 14 more shots and made 7 of them and cut the lead down to 9.

The crowd got louder and the climate in the arena was electrifying. All the celebrities and fans were cheering at the top of their lungs. Kobe used that and scored 23 more points on amazing percentages. That last quarter could not have been more perfect. He carried LA’s comeback and scored the most points in a farewell game, ever. 60 points, exclamation point, Mamba Out, period.

The Black Mamba continued winning with an Oscar award

The 2016 season turned out to be the best one in recent history. And everything about it became iconic. To Kobe, it was his poem or letter to the first love of his life. ‘Dear Basketball’ became a lot more relevant and Kobe wanted to cement its legacy. He worked and made ‘Dear Basketball’ an animated short that was voiced over by Kobe himself.

The Oscars is something I love, & watch every year. Here is my favorite Oscar winner

The art gave the aesthetic of rough drawings that tell the story we all want to hear. The final product was a masterpiece and he released it for the world to see. The reception was mind-numbingly amazing. And that can be quantified by the fact that it was nominated for and won the Academy Award for ‘Best Animated Short Film’. Even though he just gave up the sport he loved, he found a calling and happiness in something much different. He became a storyteller and even till his last breath he would never take that part of himself away.

The world missed Kobe Bryant but his memories will carry on a legacy that will never fade away.