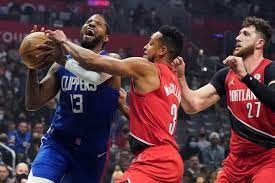 LA Clippers and Portland Trailblazers are two western Conference teams ranking just around playoff spot. The Clippers are 7th with a 5-4 record and Blazers are 9th with a 5-5 record.

Steve Balmer’s aspiration to be LA’s face, at least for 1 season with Championship, brought Star duo Kawhi Leonard and Paul George together with the Clippers. LA tried the trio of Chris Paul, Blake Griffin, and DeAndre Jorden – which never reached the NBA Finals. But now they have proven Stars to hand them the Championship title.

But Season started off with bad news of Kawhi’s injury. Coach Lue then made adjustments to keep Clippers in the hunt for playoffs. Those changes proved fruitful scoring 107 points per game, 6 points below last season’s average.

Portland, build around Damian Lillard, managed to keep hold of their All-Star this season. Though Lillard’s Performances are not at par with the high standards set by Lillard himself. Portland managing 110.7 points per game. Big Thank you for the resurgence of CJ McCullum.

After 3 consecutive losses – Blazers bounce back to win 2 in a row. Rare Lillard Slump is kind of worry for Blazers. The coach could expect a similar performance from him as in the last game against the Clippers

Our guy has joined the 17K Club!

With the season series tied at 1-1, teams will be looking to have the upper hand in case of a tie for a playoff place. Portland has been with a similar roster for around 3 seasons while the Clippers have made a “win it all” situation with resigning of superstars.

Offensively Clippers are +4.4 and Blazers are +2.9. At the same time defensively also, Clippers are allowing 4.8 fewer points than Portland. In 3 point situations, the Clippers need to better their defense, as statistically, Portland is 2nd to Warriors only.

Paul George is leading the Clippers in point per game (27) while CJ McCullum carried the offence for Blazers (22.1). George is Clippers best player for rebounds (8.2), Steals (2.6), and Assists (5.2) also. Blazers have well-distributed stats –Nurkic leading in rebounds (11.9) and Lillard providing most assists (8.5) for them.

Clippers though seem to be the solo performance team; other Players are not far behind. Reggie Jackson could be crucial in the Clippers victory in this match.

How to watch LA Clippers vs Portland Trailblazers?

LA Clippers and Portland Trailblazers will match up against each other at Staples Center. The stadium is prepared to accept fans in full capacity. International viewers can access the game on NBA League Pass. While local broadcaster for the US will be ESPN.