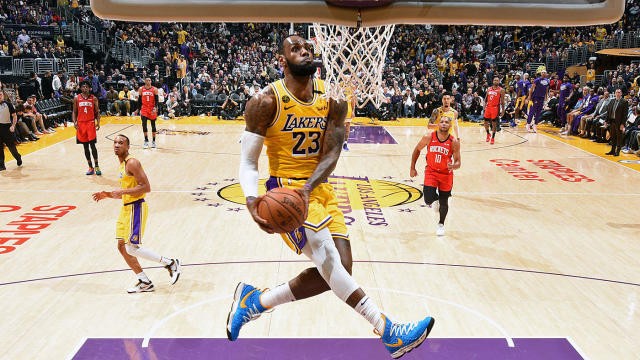 Team Hollywood, the Los Angeles Lakers, is having a bad time. From losing streaks to incessant trolling and slander, nothing seems to be going right for LA. The purple and gold had a ton of championship aspirations and right now they would even take just a playoff appearance.

The Los Angeles Lakers will be taking on the Houston Rockets. These teams have played each other thrice before with the last game taking place on 29th December 2021.

The Los Angeles Lakers haven’t won many games this season but they have taken a win every time they played the Houston Rockets. The games have seen a rare case of the Lakers domination. However, the Rockets are the worst team in the NBA standings and are tanking. That makes these wins less than viable.

Surprisingly in their first meeting, LeBron James struggled. It probably was his worst performance this season. He shot 0 of 6 from the 3 and scored just 15 points. Carmelo carried LA that day against his former team. LeBron bounced back in their 2nd and 3rd meeting. He scored 30 and 32 points to easily cruise past the bottom feeders.

The only bright side for the Rockets was their rookies got a chance to shine a little against the Lakers where Jalen Green scored 24 in both the 2nd and 3rd game.

The Lakers need wins badly to make the playoffs. Otherwise, this season for them will be a complete waste. Luckily for them, they’re going up against the worst team in the NBA that they have been winning against.

It won’t be a guaranteed win as we saw the Lakers lose to a Blazers team that had almost 9-10 players that are in the rotation have to sit out. However, the Rockets will still continue their tank and getting a win tomorrow would just be out of spite rather than their plan.

The Los Angeles Lakers should sweep this season series against the Houston Rockets and win their 29th game of the season.

How to watch the Los Angeles Lakers vs the Houston Rockets?

You can watch the Los Angeles Lakers play the Houston Rockets on 9th March 2022 at 8:00 PM ET on ATTSN Southwest. You can also watch the game globally on NBA league pass.