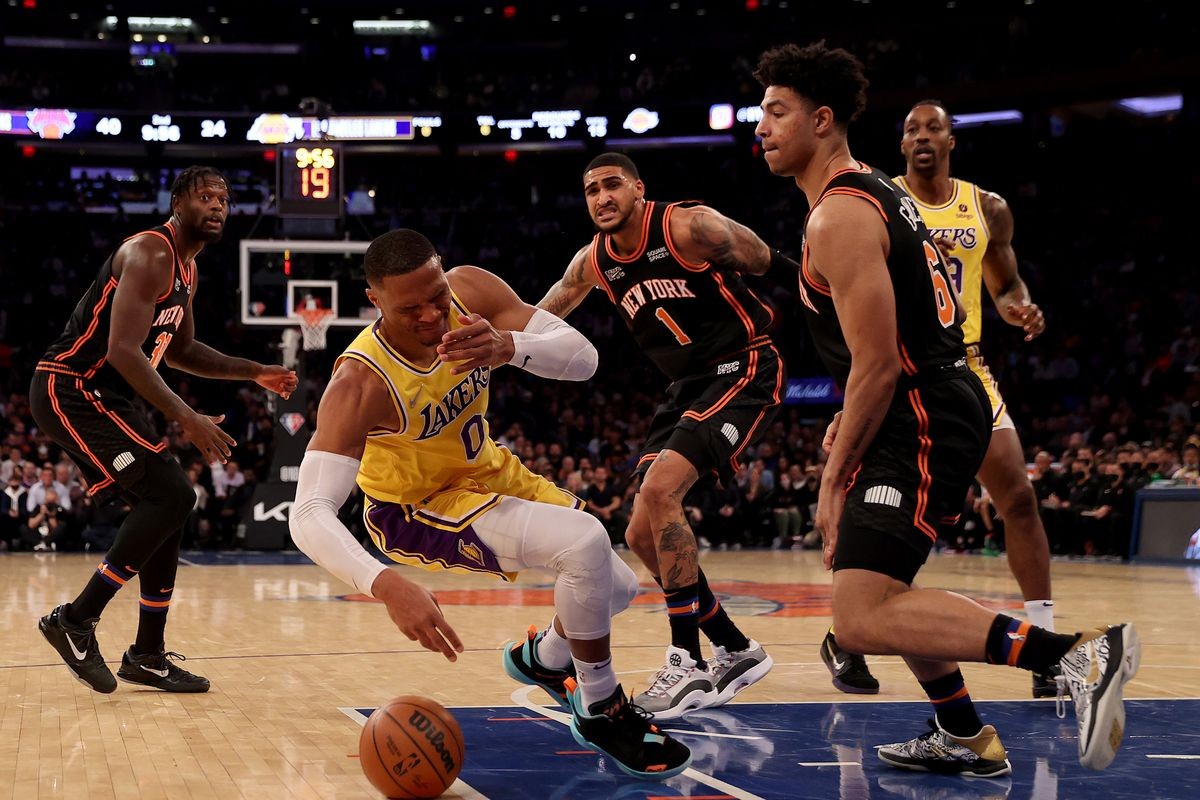 The Los Angeles Lakers will host the New York Knicks in the Crypto.com Arena as both teams go head to head for the second time in the 2021-22 NBA season. In their last game, the Knickerbockers took a 106-100 victory over the Lakeshow. Evan Fournier led New York with 26 points, while Russell Westbrook had a 31 point game.

The Los Angeles Lakers take on the Knicks after a heartbreaking loss to the Los Angeles Clippers. The Purple and Gold are having an inconsistent season with a record of 25-28 as the ninth seed in the west.

Leave it up there, AD will handle the rest.

With LeBron James missing time, the Los Angeles Lakers miss his 29.1 points, 7.7 rebounds and 6.3 assists. Consequently, the scoring load is on the shoulders of Anthony Davis who is putting up 23.6 points, 9.9 rebounds and 2.2 blocks and Russell Westbrook’s 18.7 points, 7.8 rebounds and 7.7 assists. Carmelo Anthony is making 2.3 made 3-pointers per game while shooting 39.2% from beyond the arc for the Lakers.

Like the Lakers, New York Knicks are also having a difficult season as the 12th seed in the eastern conference. The Knicks have a record of 24 wins and 28 losses and enter this game after suffering a 12 point loss to the Grizzlies. New York is averaging 103.6 points, 47.0 rebounds, 22.8 assists, 6.9 steals and 4.4 blocks per game while shooting 44.1% from the field. Amidst a difficult season, Knicks’ defence allows 104.9 points per game.

Julius Randle leads the Knicks in points, rebounds and assists as he is averaging 18.5 points, 9.9 grabbing rebounds and serving up 5.1 assists per game. Evan Fournier has been the best shooter from the Knicks while knocking down 2.9 three-pointers per game. RJ Barrett is finally living up to the hype as he is averaging 17.5 points and 5.7 rebounds.

The Los Angeles Lakers have a slight advantage over the New York Knicks in this game. Despite being a top defensive team, the Knicks have struggled in their recent games and could struggle in front of the offensive strengths of the Lakers.

New York’s guards have struggled to defend Russell Westbrook as he scored 31 points in their last matchup. Similarly, their bigs co Anthony Davis on the perimeter. Los Angeles has a home record of 16-12 at home this season, giving them another advantage in this matchup. Hence, the Los Angeles Lakers are the favourites to win this game.

How to watch Los Angeles Lakers vs New York Knicks?

Spectrum SportsNet will be the local broadcaster for the Los Angeles Lakers vs New York Knicks game. Meanwhile, fans can watch the match on the NBA League Pass platform.