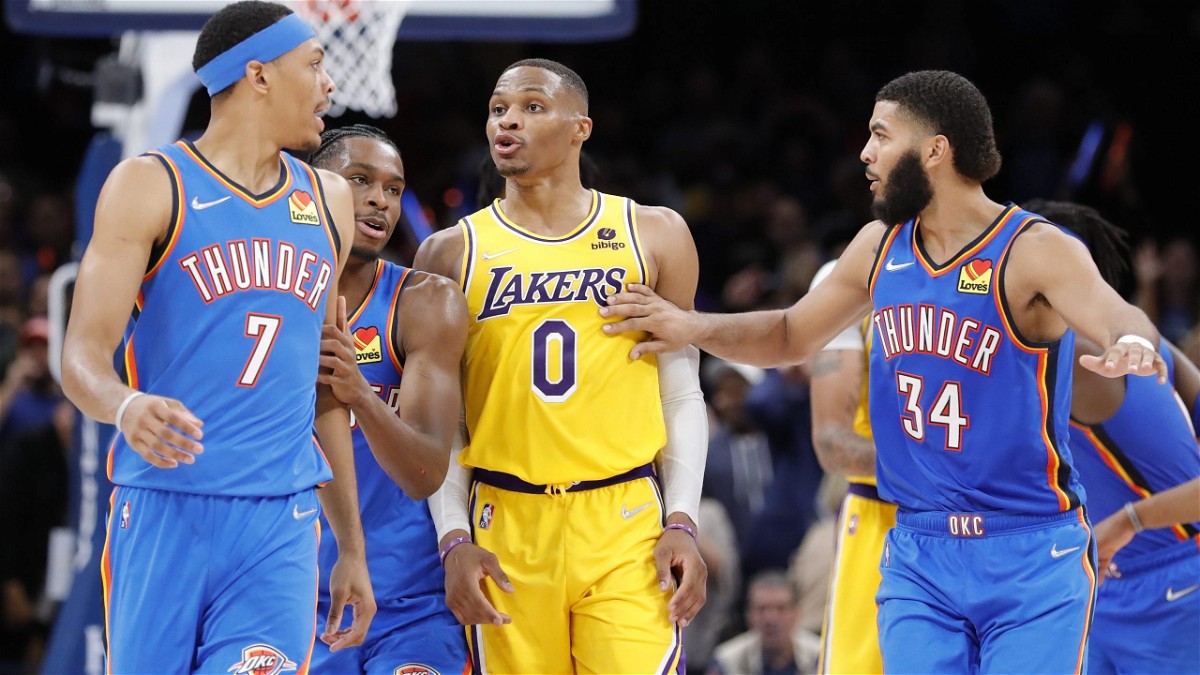 LA Lakers and Oklahoma City Thunder face-off for the 2nd time this season. LA will look to avenge their shocking loss last time they played against Oklahoma City Thunders. Lakers blew a 26 points lead 1st time in franchise history, when they were 230-0 including playoff fixtures.

The Lakers entered play with a 230-0 record (including playoffs) when leading by at least 25 points in a game over the last 25 seasons.

They led by 26 tonight, their largest blown lead over that span. pic.twitter.com/2fd5GdH5Dd

LA Lakers and OKC Thunders, had a crazy game last time they meet up. Lakers not only blew a 26-point lead but missed 3 chances to tie the game in the final minutes. Star performer Russell Westbrook got ejected. And OKC had 1st win of the season against all odds.

After 8 games, the lakers have found perfect chemistry between players and now have 4 different players leading in different stats. Anthony Davis leads them in points per game and Blocks. Russell Westbrook providing Assists, LeBron sneaking in with most steals. Melo is also the most effective Laker from deep. This is an unfamiliar scene for any LeBron Team of the past – a King shows all the way.

After a slow start, the Lakers managed to climb up to the 5th spot with a 5-3 record. Lakers won 3 in a row after a loss to Oklahoma City Thunders. It was a team performance rather than individual brilliance that carried the Lakers over the line in those matches.

Rebuilding Oklahoma Thunder are trying to give more minutes to their young team so that they can decide on the player to be retained with Shai Gilgeous-Alexander. He has been a regular contributor for Thunders since he transferred from the Clippers.

OKC will seek more regular plays and production from other guards – Luguentz Dort & Josh Giddey. Gidey is leading OKC in assists – 5.9 assists per match which is not so impressive. Giddey is also doing well in rebounds and the Steals department, trying to be a focal point for the organization.

FROM DOWN 26 WE ARE UP 2 ENTERING THE FOURTH

When we compare the Los Angeles Lakers and the Oklahoma City Thunders after seven games, we can see significant statistical differences between the two teams.

The stats were similar last match also. Yet The Thunders were able to beat the Lakers emphatically. It alarmed the Lakers, and they managed to keep things tight even with bigger teams later on.

With home-court advantage and LeBron James return, the Lakers will be able to redeem themselves with a win over OKC.

How to watch LA Lakers vs Oklahoma City Thunders?

LA Lakers and Oklahoma City Thunders match up will take place at Staples Center. The stadium is prepared to accept fans at full capacity. International viewers can access the game on NBA League Pass. While local broadcaster for Oklahoma is Bally Sports, and for the Lakers it is Spectra Net.