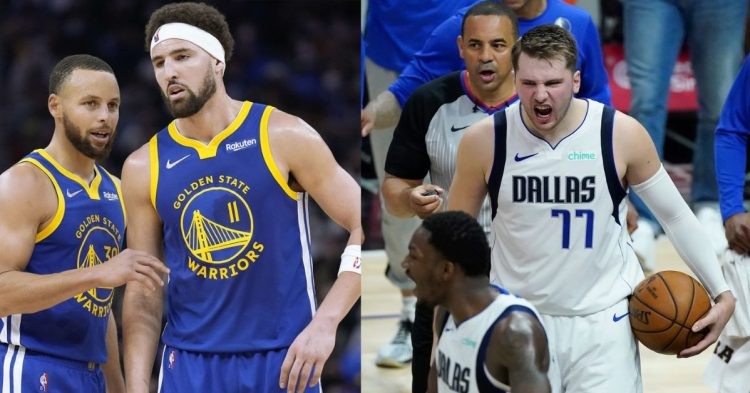 Stephen Curry and Klay Thompson won their 4th title with the Warriors this season. In order to get to the NBA Finals, they had to eliminate Luka Doncic and the Dallas Mavericks in the Western Conference Finals. We remember that the series ended in 5 games. However, not many people know the arguments and bickering between both sides throughout the series.

The Golden State Warriors eventually moved on and won the NBA title after eliminating the Boston Celtics in the next series. Luka was only one series away from making the NBA Finals this season for the first time in his career. As tensions escalated between both parties, words were exchanged. We should wonder what these NBA stars said and how much truth there could be to it.

There is no such thing as an easy series or matchup in the NBA postseason. Teams fight tooth and nail, throwing every defensive scheme possible at the opposition to slow down their offense. While the Warriors were the better and more experienced team, Doncic was the best player on the court for that series.

We remember that GSW had a homecourt advantage and took an early 2-0 lead in the series. Moreover, they won game 3 back in Dallas and took a commanding 3-0 lead. Doncic ended up winning game 4 and forcing the series to go 5 games. He was very unhappy with the officiating and accused Steph of flopping and earning calls.

“Call it for Luka Doncic”. We can hear him in the video and see completely disgruntled and frustrated body language. Curry had enough of his complaints after a while and asked him to shut up. This only intensified the situation and other teammates got involved.

It seems to be a growing trend in the NBA for superstars to “look for calls”. Sometimes they display such bad body language and behavior when they aren’t given calls they think should be awarded. At the end of the day, the Warriors won the series. Perhaps the officiating wasn’t to Doncic’s liking. However, perhaps he should be criticized for accusing the other team of cheating. Especially when he is on the losing side.

Simply put, we are confident Devin Booker and Chris Paul thought the same or worse of Doncic after he eliminated them in the previous round. However, to quote the late Kobe Bryant, “Winners don’t make excuses”. Doncic did well, but still has a ways to go before taking his team to the promised land.
Tags: Luka DoncicNBAStephen Curry
Previous Post