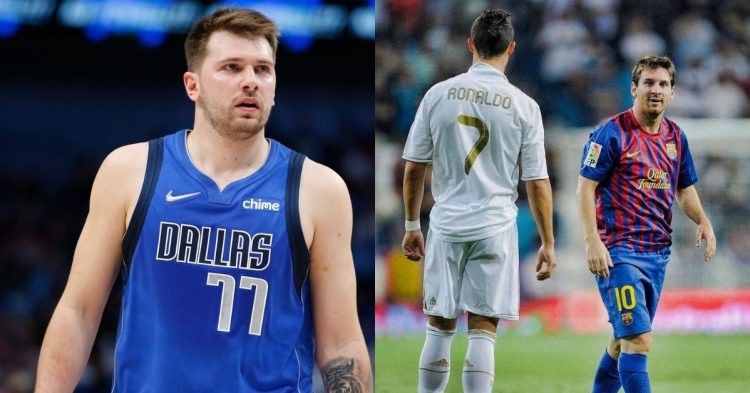 Luka Doncic has become one of the most famous players in the NBA. His performances on the court have surely helped him achieve that level. As he reaches great heights, details about his early life have come to light as well. It is no secret that Luka played for the Real Madrid basketball team before joining the NBA. And it looks like this has contributed to who he idolized in soccer too.

Soccer is one of the world’s most-watched sports. It seems to be growing rapidly and Cristiano Ronaldo and Lionel Messi are surely the pillars of the sport. They have helped to uplift soccer and make billions of people fall in love with the game. And it looks like Luka isn’t any different as well. A while ago, the Dallas Mavericks star opened up on who his favorite player was.

Why does Luka Doncic prefer Cristiano Ronaldo over Lionel Messi as his favorite soccer player?

In an interview, Luka revealed that his favorite player growing up was none other than Cristiano Ronaldo. It might be a tough one to digest for Lionel Messi‘s fans though. However, the reason for his preference isn’t all that surprising.

Luka joined the Real Madrid academy when he was just 13 years old. That would be in 2012. That year, Ronaldo was one of the best soccer players in the world. The former Los Blancos striker was bagging goals left right and center under the guidance of Jose Mourinho. Although Real did not manage to win many trophies that season, Mourinho’s free-flowing counterattacking playstyle attracted millions of fans.

Together with that, Luka has disclosed in the past that he has met CR7 in person as well. Luka that he was too nervous to speak to him on the night. That shows how big of a superstar Ronaldo was during the time. If we’re being honest, he has reached bigger levels right now.

During his time at Real Madrid, Ronaldo managed to score 450 goals in just 438 appearances. To this day, that remains one of the best records any player has at any club. It will be safe for us to claim that it will stay that way for a while. One of the main reasons why Luka is a huge fan of Ronaldo would be the fact that he witnessed the 5x Ballon d’Or winner’s greatness from the front row.