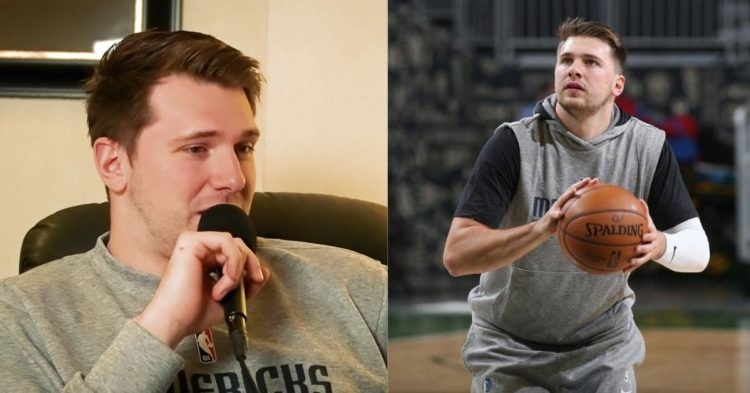 Luka Doncic is the star point guard for the Dallas Mavericks. He is widely considered to be one of the future faces of the league and is a terrific talent. He managed to carry his team to the Western Conference finals these playoffs, That is the furthest Luka has ever taken his team as he never made it past the first round up to that point.

Doncic is nicknamed Baby Bird after Boston Celtics legend Larry Bird. This is due to his unique combination of shooting and facilitating abilities. Moreover, he is also quite genetically gifted and is listed as 6’7. He recently appeared on the podcast of former NBA player JJ Reddick. There, he was asked how he felt about his body and other situations that involved his size. It is important to know what Doncic had to say on this issue.

Modern-day basketball is widely positionless. Back in the olden days, adherence to the positions and the styles of play associated with them were more common. Simply put, a big player like a center would not be trusted to handle the ball as the point guard would. In the same way, guards would be criticized if they didn’t facilitate enough or played in the interior.

However, players in this generation are simply too talented to adhere to these same archaic rules. Luka Doncic is one such player. He is simply too talented to be considered a traditional big. Moreover. his passing ability lets him facilitate the offense for the team. He discussed how he felt his size helped him with JJ Reddick.

“Yeah for sure. But the other thing I think a lot of people don’t know about me, my legs are….good. I have good legs. Not for jumping obviously but strong legs. Somebody calls them tree trunk legs. But I think that helps me a lot and size-wise too you know. If the point guard is gonna be guarding me, you know I’m going to have an advantage in the post.”

Thus, Luka concluded that his physique is an advantage. Additionally, he also took the chance to defend the strength in his legs and called out people who mocked him for his lack of athleticism.
Tags: JJ ReddickLuka DoncicNBA
Previous Post