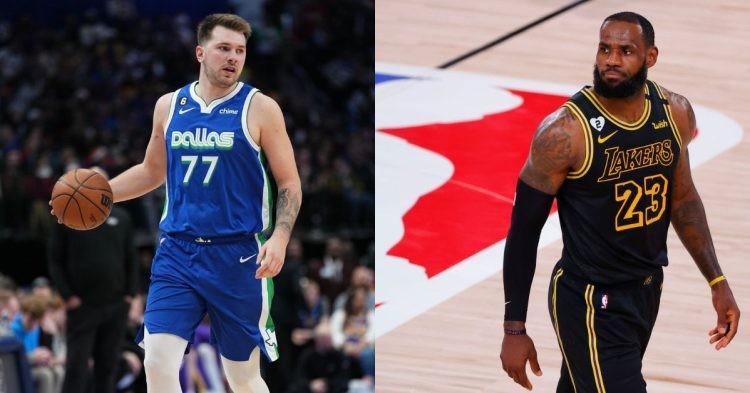 Luka Doncic and LeBron James on the court (Credit: Twitter)

Does Luka Doncic have what it takes to become the next LeBron James? This is a question that NBA fans have been wondering about for a while now. Doncic has shown incredible potential and skill so far in his NBA career. By doing so, he has managed to carry the Dallas Mavericks back into relevance.

This should certainly sound familiar to fans who remember when LeBron first joined the league. He too showed amazing potential and soon turned the Cleveland Cavaliers into contenders. With all of that being said, we should wonder if Luka is actually better than LeBron. If so, knowing the statistics that back it up and make Doncic’s case is also essential.

While both LeBron and Luka have very different playstyles, they have similar builds and high basketball IQs. Additionally, their respective franchises have trusted and relied on them from the very beginning. As we all know, LeBron never managed to win a title during his first stint in Cleveland.

He finally managed to win only after taking his talents to the Miami Heat and playing alongside Dwyane Wade and Chris Bosh. He was 27 years old at the time and clearly in his prime. On the other hand, Luka is only 23 years old at the moment. Therefore, claiming he has to win a title immediately to draw comparisons is quite invalid.

As far as statistics go, Luka is proving himself to be just as good, if not slightly better than what LeBron James was during his rookie years. Doncic averaged 21.2 points, 6 assists, and 7.8 rebounds during his first year with the Mavs.

The King averaged 20.9 points, 5.9 assists, and 5.5 rebounds in his first year with the Cleveland Cavaliers. Therefore, it is fair to say Luka was better than LeBron in all 3 important statistical categories during his first year in the league. Additionally, he was also slightly more efficient and made 42.7% of his field goal attempts. LeBron made 41.7%.

The media loves drawing comparisons between aging stars and the future of the league. Therefore, they have propagated a rivalry between Luka and Bron and expect Doncic to seize the mantle that LeBron James has held for so long. Only the future will tell us how much truth there is to these speculations.