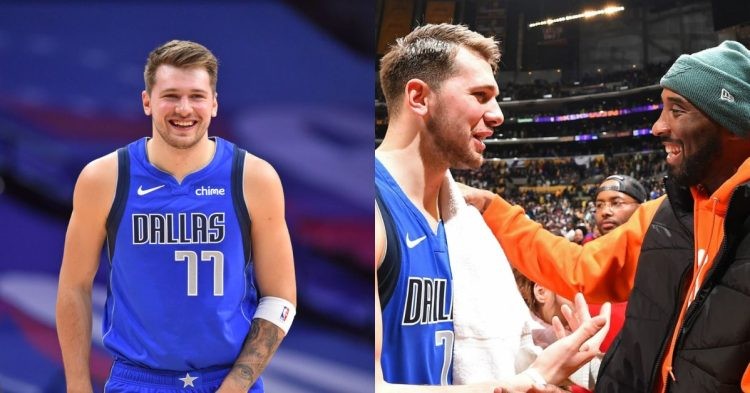 Superstar point guard Luka Doncic has garnered praise from numerous NBA legends, ever since he entered the league. So far, he has more than lived up to the hype of what scouts saw in him. While Luka has had a plethora of moments with a lot of Hall of Famers, there are some that he’s going to cherish forever.

Back in 2019, during a matchup between the Lakers and the Mavs at Staples Center, there was a special personality in attendance on the sidelines. During the second quarter, Luka was astonished when he overheard someone speaking to him in Slovenian as he was getting ready to inbound the ball from the sidelines. When he turned around to look, he discovered that it was none other than Kobe Bryant himself.

What did Kobe Bryant say to Luka Doncic?

Kobe’s competitive nature and intelligence have never been a secret ever since he stepped foot in the league, back in 1996. He was always the one who would find multiple, sometimes bizarre ways to gain a competitive advantage over his opponent.

LUKA on the heckling fan at the Lakers/Mavs game: “He was talking Slovenian. So I was like, ‘Who’s talking my language?’ I saw Kobe and was really surprised.” pic.twitter.com/5d0MdE67gc

After Kobe retired from the NBA, he took on the role of a supporter for his former team. So when he saw Luka in front of him on the sidelines during the game, he couldn’t help but talk trash to him to try and get in his head. The best part? This time, he did it in Luka’s first language, Slovenian.

“He was talking Slovenian. So I was like, ‘Who is talking my language?’. And then I saw Kobe, and I was really surprised.”, Luka later revealed. Kobe had never been shy of talking trash to his opponents, but to do it in their native language, speaks volumes about his competitive drive. Even as a supporter, Kobe was looking to do all he could to help his team win.

So what did Kobe actually say to Luka? Was it playful banter or some serious get-on-your-nerve talk?

“I can’t say that”, Doncic replied when asked about it in an interview. Though he did indicate that the Mamba uttered unprintable words toward the Mavs’ star. But by the looks of it, seeing how he and Kobe shook hands after and got together again after the game, it was most likely just playful cussing. Luka later described that he would never forget that interaction with the 5x NBA champ.