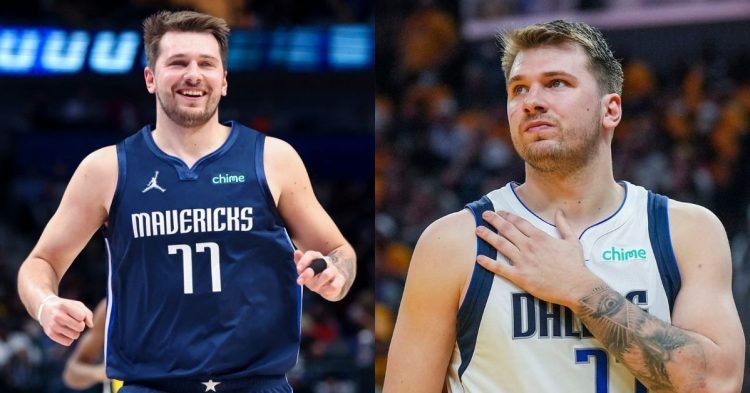 Luka Doncic is currently one of the best players in the NBA. Even though he is just 23 years old, Doncic has shown his class on multiple occasions during his NBA career. So far, the Dallas Mavericks star has averaged 27.0 points, 8.6 rebounds, and 7.9 assists in 293 games in the regular season and playoffs in his career.

However, despite the stellar numbers he has put up on the board, many fans have called him out for his weight. For context, in late 2020, many noticed that Luka had put on some weight. However, that may have been because of the pandemic and the quarantine the entire world went through. Luka’s weight became a huge talking point as fans both took a shot at him and defended him.

No Fat White dude from Slovenia is EVER gonna win the MVP. He’s got no heart. He’s SOFT

A fan wrote, “No Fat White dude from Slovenia is EVER gonna win the MVP. He’s got no heart. He’s SOFT.” The comment was an indication of how Luka does not have what it takes to win big in the NBA. Despite being a strong contender for the award many times, Doncic has never been able to win it.

Luka was listed at 230 lbs when he was a rookie in the NBA. However, reports say that he reached 260 lbs in December 2021. However, amid harsh criticism from fans in the NBA world, Luka cut down his weight to 240 lbs in January 2022.

For the last couple of years, fans have been going at it about Luka’s weight. A fan tweeted, “I wanna know Luka Doncic’s body fat % It’s gotta be at least 16%.”

This year, Luka has received plenty of criticism about his weight. Recently, the Slovenian responded to the hate he has received. While some have had a go at Luka for just his weight, a fan criticized Luka’s ability to dribble. They said, “The Mavs are the fewest team who score in the transition, because Fat Luka strangles the pace with his dribble.”

The Mavs are the fewest team who score in the transition, because Fat Luka strangles the pace with his dribble @luka7doncic @LeaderOfHorde

Another user mentioned, “Fat Slovenian [Luka Doncic] busy trying to flex, ends up holding that L.” The tweet is related to the Mavericks’ recent loss against the Phoenix Suns. The Mavs lost 107-105 as Luka failed to lead them to a win despite scoring 35 points.

In addition to that, fans have drawn comparisons to Zion Williamson, another NBA star who is often caught out for his weight.

Heeeeeey, Luka Doncic looks fat as hell, why aren’t we talking about he and a slim fast regiment? We pile on Zion, but Luka’s ass is fat. 😂😂

A fan said, “Luka Doncic looks fat as hell, why aren’t we talking about he and a slim fast regiment? We pile on Zion, but Luka’s ** is fat.” While some have had a go at Luka, some of the fans have come out in support of him as well. One claimed, “Luka’s fat a** is on the floor ballin.”

Luka’s fat ass is on the floor ballin

The 23-year-old’s fans believe that Luka’s weight has not been a disadvantage to him in any way.

@luka7doncic Luka Doncic will regress this year due to being fat. Inexcusable. Will average 25 ppg 8 rpg and 8 apg. Disappointing. Playing too many video games.

A fan said, “Luka Doncic looks fat as f**k and still put up 27-8-4 Against Giannis. Lmao. The disrespect is real. Fat Luka better than 99% of the league. Imagine when he loses weight.”

Luka Doncic in the gym putting in work. 😤

The common opinion is that Luka may be overweight, but it doesn’t hold him back from balling out on the court. However, if he does spend time to lose weight and stay in shape like he did this year, he will be a completely different player.