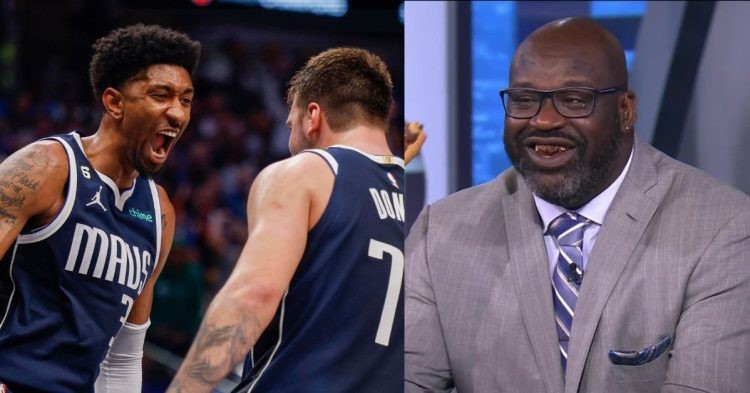 Luka Doncic is coming off one of the best years in his young NBA career. He managed to carry his team, the Dallas Mavericks all the way to the Western Conference finals. This earned praise and admiration from several NBA greats including Shaquille O’Neal However, as we all know, they were defeated by Stephen Curry and the Golden State Warriors.

Things never happen the same way twice. The Mavs know they will remain in contention as long as they have Luka on the roster. They tried to pair him up with Kristaps Porzingas. However, that experiment clearly did not work out as Porzinagas is now on the Washington Wizards.

In order to replace him, the Dallas Mavericks acquired a young talented center Chrisitan Wood from the Houston Rockets. It would amuse people to hear about an interaction between Chrisitan and Shaquille a few years ago.

The NBA world is full of athletes who engage in trash-talking and other forms of verbal altercation, if not physical. Taking jabs at someone and responding accordingly is the entertainment of the day. Even if the insult is not downright obvious, there is always a hint of belligerence

While Shaq’s career as a player is over, he has still kept himself involved in the league’s activities. O’Neal is an anchor for an ESPN show called “Inside the NBA” alongside former player Charles Barkley and others. There he is given the opportunity to talk to players after their performance when still present courtside.

Christian Wood is proving himself to be a force in the NBA. He has averaged 14 points and 7 rebounds since 2016. These numbers have already seen a spike this year with him playing on the Dallas Mavericks. Wood is currently averaging 21 points and 8 rebounds.

Back when he was with the Rockets, Chrisitan had quite an exceptional performance when his team defeated the San Antonio Spurs. He had 27 points and 15 rebounds to end the night. Shaq took the opportunity to congratulate him but also threw a little dirt in with his words.

“Christian it’s Shaq. I owe you an apology I wasn’t really familiar with your game… and you were out here playing 6 teams, So I wanna say I’m proud of you…”

The second Shaq revealed that he wasn’t familiar with Wood’s game, he was given a quick response mid-speech, “Oh man you’re a casual.”

A casual refers to someone who is pretending, relaxed, and not very concerned with the events that are transpiring. In other crude words, Shaq said “I’m impressed considering I haven’t heard of you” and Wood responded with “Well you should be knowing who I am”.